‘Until you kill me, there will be no other elections,’ says autocratic leader of 26 years

Speaking in a video address from Lithuania, Belarusian opposition politician Sviatlana Tsikhanouskaya calls for the creation of a legal mechanism to ensure that a new, fair presidential election can be held. Video: Reuters 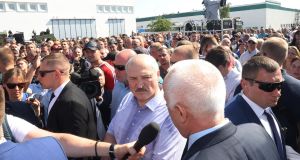 Workers in Belarus have heckled and booed the country’s embattled president, Alexander Lukashenko, as he struggles to quell huge protests and strikes that threaten to topple his autocratic regime after 26 years in power.

Mr Lukashenko looked rattled on Monday when his speech at a major truck maker – the kind of state factory that has always been the bedrock of his support – was interrupted by workers shouting him down with accusations of lying and chants of “Leave!”

He departed by helicopter before workers from another large factory arrived at the scene, as state employees ranging from miners to journalists to doctors and nurses came out in protest against Mr Lukashenko’s claim to have won an August 9th election, and to denounce the brutal police crackdown on demonstrators that followed.

Mr Lukashenko claims foreign forces are behind the protests and that Nato is massing troops in neighbouring Lithuania and Poland, and he says Russia has pledged to help defend Belarus from any external threat.

He has offered no evidence for his accusations, however, and refuses to address allegations of electoral fraud or condemn extreme police violence during protests in which two people died, hundreds were hurt and thousands detained.

In what appeared to be a bid to buy time, the former Soviet state farm boss told workers that new elections could be held, but only after the adoption of a new constitution, which may take many months or even years.

“We’ll put the changes to a referendum, and I’ll hand over my constitutional powers. But not under pressure or because of the street,” he said.

“I’m not eternal. But if you destroy the first president [of Belarus] you will destroy all the others, like in neighbouring countries.”

During the same factory visit, however, he also said: “We have held elections. Until you kill me, there will be no other elections.”

Official results gave Mr Lukashenko 80 per cent of votes in this month’s ballot, a figure that was implausible even before hundreds of thousands of people subsequently took to the streets in the biggest protests ever seen in Belarus.

Most demonstrators show support for opposition presidential candidate Svetlana Tikhanovskaya (37), who claimed to be the real winner of the election before she fled to Lithuania last week after allegedly being threatened by Mr Lukashenko’s regime.

“I’m prepared to take responsibility and act as a national leader so that the country can calm down and return to its normal rhythm, so we can release all political prisoners and prepare legislation and conditions for holding new presidential elections,” the former teacher said on Monday.

She reluctantly entered politics when her husband, a popular opposition blogger, was jailed in May.

Leaders of EU states will discuss the crisis in an emergency video conference on Wednesday. The bloc is preparing sanctions against Belarusian officials it considers to be responsible for electoral fraud and the police crackdown.

“The people of Belarus deserve to have free, fair and transparent elections,” Taoiseach Micheál Martin tweeted on Monday. “People’s right to protest peacefully must be respected.”

In a statement on Monday, Minister for Foreign Affairs Simon Coveney expressed his concern at the situation in Belarus and said that the State did not recognise the result of the presidential election there.

Mr Coveney said: “I remain deeply concerned by the ongoing developments in Belarus and totally condemn the human rights abuses which we have seen take place since the flawed presidential election.

“This result was not legitimate, as evidenced by the intimidation and detentions which took place both before and after the election and the response of the state authorities to the large-scale and overwhelmingly peaceful protests which are now taking place across the country. Ireland does not accept the election result as a true reflection of the democratic will of the Belarusian people.”