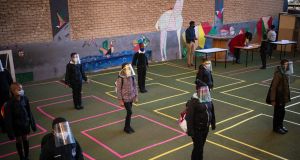 President Cyril Ramaphosa has urged South Africans not to lower their guard in the fight against coronavirus following his decision to significantly ease the country’s lockdown restrictions from midnight on Monday.

South Africa’s president informed the country on Saturday that local Covid-19 infections appeared to have peaked.And as a consequence the nation would move to level two of the five-stage risk-adjusted lockdown his government has imposed since March 27th.

Under this phase, most businesses can operate, domestic travel and small family gatherings are allowed, and schools will partially reopen. Contentious bans on alcohol and cigarette sales have also been lifted.

Restrictions that remain in place include a ban on international travel, a 10pm to 4am curfew, and alcohol sales from off-licences at weekends. In addition, nightclubs and international passenger ships will remain off-limits.

Mr Ramaphosa’s government imposed one of the world’s toughest Covid-19 lockdowns to give South Africa’s health sector time to prepare for an expected flood of infections.

Under level five of the lockdown, international and provincial borders were shut, most economic sectors were brought to a standstill, schools were closed and most people could only leave their homes for essential purposes.

While the World Health Organisation has commended Mr Ramaphosa’s approach to the pandemic, the restrictions have seriously damaged South Africa’s economy, which was already struggling after a decade of government mismanagement and corruption.

In his weekly newsletter on Monday, Mr Ramaphosa said that the number of new confirmed cases of Covid-19 had dropped from a peak of more than 12,000 a day to an average of 5,000 per day last week. Active cases of the virus have also declined to about 105,000 and the recovery rate has risen to 80 per cent.

South Africa has recorded more than half of Africa’s coronavirus infections – with 587,345 confirmed cases and 11,839 deaths by Monday – making it the fifth worst-affected country globally after the US, Brazil, India and Russia.

Although Mr Ramaphosa maintained the latest infection figures are a “sign of hope”, he insisted it is “too soon to celebrate”, given the dangers that a “second wave” of the disease posed to the country.

“We now need to manage this risk and ensure the gains we have made thus far in containing the pandemic’s spread are not reversed,” he said. “The greatest threat to the health of the nation right now is complacency.”

Most people have welcomed the easing of the restrictions, but government critics like the Democratic Alliance (DA) party and some businesses have argued it should have been done months ago.

“Our country simply cannot afford to turn away [international] tourists, and we can’t continue to jeopardise the education of our children,” said DA interim leader John Steenhuisen.