French woman set to be rehabilitated as world’s oldest person

Jeanne Calment died in 1997, aged 122. New research has rejected claims she was a fraud 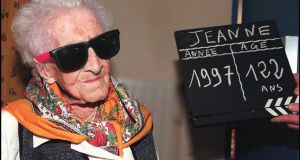 Jeanne Calment was already a supercentenarian, a person aged over 110, when a local artist sought her out in the nursing home in Arles to solicit her memories of Vincent Van Gogh. Calment had been a 13-year-old girl when Van Gogh came to Arles in 1888, and remembered townspeople calling him a madman.

Interest from scientists and media snowballed. Calment relished the attention. “I waited long enough to become famous,” she said. “I intend to enjoy it for as long as possible.”

A local notary called Raffray had gambled on Calment’s demise and lost. She was 90 and he was 47 when Raffray purchased her fabric shop en viager, meaning he paid her a stipend while she lived, in the hope of inheriting the shop. She survived him by two years.

Calment was nearly deaf and blind, but she reigned like a queen over the nursing home. “I await death and journalists,” she said when press flooded in from around the world for her 120th birthday in 1995. The world’s oldest woman had prepared her bon mot: “I only have one wrinkle and I am sitting on it.”

Calment passed away in August 1997 at the age of 122 years and 165 days. The Guinness Book of World Records recognised her feat.

Michel Allard, a French doctor with the Ipsen Foundation, and Jean-Marie Robine, a demographer and research director for the French life sciences institute Inserm, interviewed Calment 30 times in the early 1990s. After years of research, they published their first article on Calment, titled The Oldest Human, in Science magazine. They would publish hundreds more.

Then last December, Valery Novoselov, a Russian gerontologist, and his compatriot Nikolay Zak, a mathematician who worked as a glass-blower in a chemical laboratory, challenged Calment’s claim to the title in an article in the US review Rejuvenation Research.

Jeanne Calment was a fraud, the Russians asserted. The woman who died in 1997 was in fact Calment’s daughter, Yvonne, who would nonetheless have been 99 years old.

Civil records showed that Yvonne Billot, née Calment, died in 1934. The Russians said it was Jeanne who died, but that Yvonne assumed her identity to avoid paying inheritance tax.

Zak said it was statistically impossible for Calment to have lived 122 years, particularly in such good condition. One official record listed the colour of her eyes as black. Another said they were grey. They thought it suspicious that she had not wanted to celebrate her 100th birthday, and that the 1934 death certificate was signed by a single witness.

The burghers of Arles were horrified by the Russian allegations. In a town of 25,000 people, where the Calments were well known, it would have been impossible for the daughter, who was 23 years younger than her mother, to assume her mother’s identity without anyone noticing, they said.

Allard and Robine, the French doctor and scientist, struck back on Monday. Along with the Swiss gerontologist Bernard Jeune and the Danish scientist François Herrmann, they published an article in the Oxford University Press’s Journal of Gerontology in which they debunked the Russian thesis, point by point.

Using several mathematical models, the four scientists concluded there was “a significant probability that Jeanne Calment reached the age of 122”. She was genetically prone to long life, since her two parents and four grandparents reached a combined age of 477 years, compared to an average of 289 years for most people.

Allard and Robine had based their findings on an unusually complete set of civil and religious archives, including personal documents, parish registries, census lists and school and military records.

When Allard listened again to the interviews that he and Robine taped with Calment in the 1990s, he heard her say that Yvonne had lived in a sanatorium, possibly for tuberculosis, though the disease was considered too shameful to be named then. Jeanne said Yvonne came home to die in Arles in 1934.

Allard and his colleagues found evidence that Yvonne was treated for pulmonary illness in Leysin, Switzerland, from 1931 until 1934. They researched the military record of her husband, Col Joseph Billot, and found he had been given five years’ leave to care for his ailing wife.

The article published on Monday seems to settle what is known in the scientific community as the JC Case, once and for all. A DNA test could provide absolute proof that the woman buried in Arles really was Jeanne Calment, and not her daughter. Calment’s distant relatives refuse to see her disinterred, on the grounds the dead must be left in peace.

The reputations of Novoselov and Zak are in danger. The new study concludes with a question: “How is it possible that an article containing so many baseless assertions” could have been published? They demand that Rejuvenation Research officially withdraws the Russians’ offending article.