Trump claims he would have tackled Florida gunman unarmed

‘I really believe I would have run in there even if I didn’t have a weapon,’ president says

US president Donald Trump tells a group of US governors that he would have run into the Florida high school during the recent gun massacre "even if I didn't have a weapon." Video: The White House 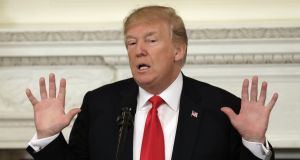 US president Donald Trump during a business session with state governors on Monday. “We’re going to have to start talking about mental institutions,” Mr Trump said. Photograph: Yuri Gripas/Bloomberg

US president Donald Trump on Monday criticised the officers who allegedly failed to enter a Florida school while a mass shooting was under way, claiming that he would have run in unarmed if he had been in the situation.

Addressing a gathering of state governors at the White House, Mr Trump said: “You don’t know until you’re tested but I think I really believe I’d run in there even if I didn’t have a weapon, and I think most of the people in this room would have done that too,” he said.

He again criticised the officers who did not stop the gunman who carried out the massacre. “They really weren’t exactly medal of honour winners,” he said.

As Congress returned to Washington after a week-long recess, lawmakers were under pressure to bring forward new measures on gun control in the wake of widespread public outrage over the mass shooting in Marjory Stoneman Douglas High School in Parkland, Florida two weeks ago which left 17 people dead.

In a speech to governors from around the country which was broadcast live from the White House, Mr Trump said he would ban bump stocks – devices that are attached to guns to simulate automatic fire – even if Congress would not do so.

“We’re getting rid of it. You put it into the machine-gun category, which is what it is,” he said of the controversial devices uses in a mass shooting in Las Vegas last October, in which 58 people died and more than 800 were injured.

He also reiterated his proposal to arm teachers in order to strengthen school security.

Mr Trump said it was “disgusting” that an armed officer assigned to the Florida school did not enter the building. Scot Peterson resigned last week after video footage showed that he remained outside the building while the gunman opened fire in the school.

A lawyer for Mr Peterson said on Monday that his client had done exactly what he was supposed to do during the shooting and had not entered the building because he believed the gunfire was coming from outside the building.

Mr Trump also said that he believed the National Rifle Association (NRA) would “do something” on gun control. He said he had had lunch with senior members of the association over the weekend and had discussed background checks.

“There is no bigger fan of the Second Amendment than me, and of the NRA, and these guys are great patriots. They’re great people, and they want to do something,” he said. “They’ve gotta do something. And they’re going to do it, I think, quickly. We don’t want sick people having the right to have a gun.”

Remarking to his audience that “half of you are so afraid of the NRA”, he said: “Don’t worry about the NRA. They’re on our side.”

As teachers at the Parkland school returned to work for the first time since the shooting, 17-year-old Maddy Wilford became the last victim to be released from hospital. Ms Wilford sustained at least three gunshot wounds during the February 14th rampage and was rushed to Broward Health hospital.

“I’m grateful to be here and it wouldn’t be possible without those officers and first responders and these amazing doctors, and especially all the love that everyone has sent,” Ms Wilford said as she left hospital on Monday, surrounded by her parents and doctors.