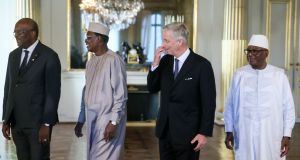 Burkina Faso’s president Roch Marc Christian Kabore, Chad’s president Idriss Deby, King Philippe of Belgium and Mali’s president Ibrahim Boubacar Keita during an audience between the Belgian king and the heads of state of the G5 Sahel organisation at the Royal Palace in Brussels, Belgium, on Friday. Photograph: Stephanie Lecocq/EPA

Twenty-four EU leaders, including Taoiseach Leo Varadkar, have given strong political and financial support to collective efforts by the impoverished West African Sahel region to fight poverty and Islamic militants.

The leaders were joined at a Brussels “high-level meeting” ahead of the EU’s own informal summit  by the heads of government of the Sahel G5 group – Mali, Burkina Faso, Chad, Niger, and Mauritania – as well as UN and African Union representatives. Some 50 states in all were present, also including the US, Japan and Norway,

The EU committed some €50 million to the 4,500-strong united G5 military force established in 2016, which is currently deployed on several of the region’s borders to tackle Islamist terror groups and people-traffickers. Two French soldiers died this week in Mali and four US soldiers were killed in October in Niger.

Speaking at the meeting, Mr Varadkar promised an additional €4 million in Irish support for humanitarian and development projects in the Sahel,  on top of the €3.5 million provided last year. Ireland also contributes financially to the African Peace Facility, which funds the joint force, through its contribution to the European Development Fund.

Some 20 Irish Defence Forces personnel are currently serving in the EU Training Mission in Mali, and Ireland has deployed civilian experts to EUCAP Sahel Mali (a political adviser) and EUCAP Sahel Niger (head of the international co-ordination unit).

The Taoiseach said Ireland remains “fully engaged in the Sahel” and that it was “vital that the different strands of our work in the region – political, development, and security – are complementary, and adequately address the complex and inter-linked nature of the transnational challenges”.

The G5 represents  a huge swathe of territory, much of it desert and scrubland, nearly the size of Europe. It is poverty-stricken, afflicted by climate change challenges, and with only the weakest of governance structures. It is also the source of many of the migrants fleeing to Europe across the central Mediterranean route, and home to significant Islamist forces engaged in regular military action against local state forces.

The summit was largely a French initiative – the French have some 4,000 troops of their own in the region, which consists largely of former French colonies. It has for some time been urging fellow EU members to take some of the burden of supporting the joint force.

Fears that violence in the arid zone could fuel already high levels of migration towards Europe and become a springboard for attacks on the West have made military and development aid there a priority for the EU and Washington.

The G5 says the Sahel force needs more than €400 million to be effective, up from the €250 million it has now. So far, the US has pledged €60 million to support it. Another €100 million is coming from Saudi Arabia, and €30 million from the United Arab Emirates.

Separately, France is expected to pledge €1.2 billion to fund development in the region over the next five years, a 40 per cent increase over current levels.