Why Syria's government is bombing east of Damascus, and Turkey's role in the north 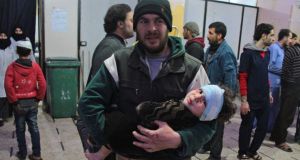 A Syrian man holds a wounded child at a makeshift hospital in the rebel-held town of Douma, following air strikes by regime forces on the besieged eastern Ghouta region on the outskirts of Damascus. Photograph: Hamza Al-Ajweh/Getty Images

Why has the Syrian government launched an offensive in eastern Ghouta?

Since most of the suburbs of Damascus have been returned to government control, the Syrian regime is no longer prepared to accept the presence of armed jihadis based in the countryside abutting the capital. Although eastern Ghouta was declared a “de-confliction” or ceasefire zone last May, it has become a battleground because the status quo is untenable.

Jihadi fighters have attacked Syrian army sites while jihadi gunners, including women, have regularly lobbed mortars into the Old City on the front line and the city centre, prompting artillery strikes and bombing runs by government and allied forces.

Who are the jihadis fighting for eastern Ghouta and where are they based?

The town of Douma, northeast of the capital, has been a hub of religious radicalisation as many men have spent years working in Saudi Arabia.

The two main factions, which divide the enclave between them, are Faylaq al-Rahman (Legion of Rahman) and the Saudi-sponsored Jaish al-Islami (Islamic Army) founded by Zahran Alloush, who became a jihadi warlord in eastern Ghouta. His father is a radical cleric based in Saudi Arabia.

Elements of an al-Qaeda offshoot, Tahrir al-Sham (Liberation of the Levant), and Ahrar al-Sham (Freemen of the Levant) also play key roles in the area. Fundamentalists took over from rebels who occupied the area in 2012. A government siege has waxed and waned since 2013 and tightened after January 28th following repeated attacks on an army base on the northeastern edge of the enclave.

Many towns are empty of civilians, who have congregated in Douma and Harasta in the north and northeast of the enclave. Syrian artillery and war planes are focusing on these towns, which explains the high civilian death toll. Fatalities in Damascus are much lower.

Why is there a stand-off?

Fighters in eastern Ghouta are determined to hold out, putting civilians at continuing risk. Earlier, in other areas, including eastern Aleppo, armed groups have reached deals with the government for the evacuation of fighters and families to al-Qaeda-dominated Idlib province in the northwest.

However, since late last year retaking Idlib has become a priority objective for the government. The army has nibbled at the edges of Idlib, the last province held in its entirety by anti-regime forces.

Why is the northwestern enclave of Afrin contested by Kurds and Turks?

Afrin is a strategic block of territory lodged between Idlib and the Syrian-Turkish border. Its majority Kurdish population is defended by Kurdish Protection Units (YPG), regarded by the Turkish government as extensions of the secessionist Turkish Kurdish Workers’ Party, which has been fighting Turkey since 1984. Turkish troops and affiliated Syrian militia invaded the enclave on January 20th and have slowly advanced on its main city.

Turkey’s incursion followed the announcement by the US of a plan to create a YPG “border force” of 20,000 men to secure Kurdish-held Syrian territory in the northeast and east. Turkey is determined to block this effort and has threatened to expel the YPG from a wide corridor on the Syrian side of the 911km Turkish border, where 2,000 US special forces are embedded with the YPG.

The US, however, has abandoned Afrin to its Nato ally, Turkey. Nevertheless, YPG reinforcements have arrived from the east, enabling the Kurds to stall the Turkish offensive.

Last weekend, the Kurds appealed to Damascus for military aid. On Tuesday, “popular” forces, said to be Syrian national guards, entered Afrin despite Turkish shelling. They could take up positions along the frontier with Turkey and the internal borders of the enclave to form a buffer between the warring sides.

Why has the Syrian government become involved?

Once the YPG in Afrin had appealed for help, Damascus responded positively as the government considers itself responsible for defending the country from foreign invasion. Damascus also seeks YPG agreement to restore to government control territory the Kurds hold in Raqqa and Deir al-Zor provinces – amounting to 25 per cent of Syria – in return for limited Kurdish autonomy in a federal Syria.

In its campaign to restore Syrian sovereignty, Damascus wants the Kurds’ help in driving Turkish occupation troops out of the towns of Jarablus and al-Bab, located in a wedge of territory east of Afrin.

Why are Syria and Turkey at loggerheads?

Syria has a seven-year-old grudge against Turkey, which formed the rebel Free Syrian Army, an expatriate Syrian opposition national council in 2011, four months after unrest erupted in Syria, and funnelled thousands of jihadi fighters, weapons and funds into Syria with the aim of overthrowing President Bashar al-Assad.

He had refused the demand of Turkey’s then prime minister, and now president, Recep Tayyip Erdogan – whose Justice and Development party is aligned with the Muslim Brotherhood – to amend Syria’s secular constitution to permit the brotherhood’s Syrian branch, which is banned, to take part in politics.