US president’s decision criticised by John McCain among others

Hundreds of demonstrators have gathered in New York, Washington DC and San Francisco to protest at US president Donald Trump's ban on transgender service members in the military. Video: Reuters 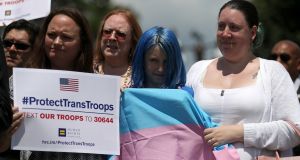 Transgender individuals will be prohibited from serving in the US military “in any capacity” US president Donald Trump said on Wednesday, undercutting one of the signature policies of the Obama administration.

A year after former defence secretary Ash Carter announced the military would be open to transgender people, Mr Trump announced the ban on Twitter, citing “tremendous medical costs and disruption”.

“After consultation with my generals and military experts, please be advised that the United States government will not accept or allow transgender individuals to serve in any capacity in the US military,” the president tweeted. “Our military must be focused on decisive and overwhelming victory and cannot be burdened with the tremendous medical costs and disruption that transgender in the military would entail. Thank you.”

Asked about reports that the Pentagon was caught unaware by the decision, press secretary Sarah Huckabee Sanders said the president made the decision on Tuesday and immediately informed defence secretary James Mattis.

Mr Trump’s announcement is likely to please conservative members of the Republican party in Congress.

In recent months, a group of House Republicans have tried to block funding for gender-transition surgeries in the military, introduced by Barack Obama, though this was voted down in the House earlier this month.

After consultation with my Generals and military experts, please be advised that the United States Government will not accept or allow......

....Transgender individuals to serve in any capacity in the U.S. Military. Our military must be focused on decisive and overwhelming.....

....victory and cannot be burdened with the tremendous medical costs and disruption that transgender in the military would entail. Thank you

While former defence secretary Ash Carter rescinded the ban on transgender people in the military last June, he gave the Pengaton a year to implement the measure. Last month, defence secretary James Mattis extended that period by another six months.

Representative Ted Lieu, a Democrat who served in the military, said the move was a “terrible decision”, arguing that it would exclude qualified and competent people from the military and “hurt our military readiness”.

“The department of defence has already decided to allow currently serving transgender individuals to stay in the military, and many are serving honourably today,” said Mr McCain. “There is no reason to force service members who are able to fight, train and deploy to leave the military – regardless of their gender identity.

The US president has previously signalled his support for the LGBTQ movement.

“Thank you to the LGBT community! I will fight for you while Hillary brings in more people that will threaten your freedoms and beliefs,” he said in a tweet last June during the campaign trail.

Meanwhile, the political future of attorney general Jeff Sessions remains uncertain after the US president renewed his attack on the nation’s top justice official.

In two tweets, the president questioned why Mr Sessions had not fired the current acting FBI director. “Why didn’t AG Sessions replace acting FBI director Andrew McCabe, a Comey friend who was in charge of Clinton investigation but got big dollars ($700,000) for his wife’s political run from Hillary Clinton and her representatives,” he said on twitter, adding: “Drain the Swamp!”

Mr Sessions met with Mr Trump in the White House on Wednesday for a meeting that officials described as standard. Asked about relations between the two men, Ms Huckabee Sanders said the president wanted the attorney general “to focus on his duties”.

Several Republicans have backed Mr Sessions in the face of an onslaught of criticism by the president, including senate majority leader Mitch McConnell. “I think the attorney general is doing a fine job and I think he made the right decision to recuse himself from the Russia matter,” he said.

Mr Sessions recused himself from all Russia investigations in March this year, after it emerged he failed to disclose a meeting with the Russian ambassador.