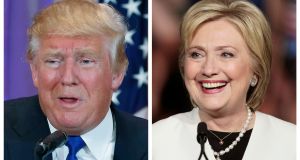 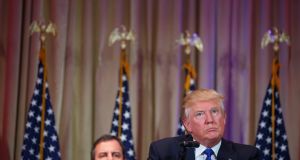 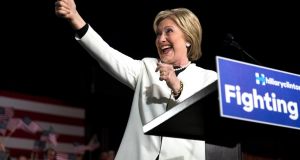 Democratic presidential hopeful Hillary Clinton gestures to the crowd during a campaign event on the evening of Super Tuesday at the Stage One Ice Studios in Miami. Photograph: Doug Mills/The New York Times 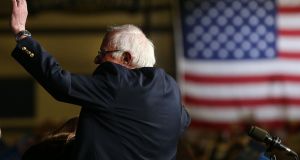 Donald Trump and Hillary Clinton scored major wins on the biggest night of the US presidential election so far, extending their leads in the races to become the candidates for their parties in November’s ballot.

Mr Trump, the Republican frontrunner, won seven states, from Massachusetts and Vermont in New England to Alabama and Arkansas in the South, in the “Super Tuesday” nominating contests in 12 states.

The brash businessman tightened his grip on the bitterly fought contest to become the party’s presidential nominee.

She strengthened her advantage over Senator Bernie Sanders, whose victory in four states including his home state of Vermont will keep his well-funded campaign going to fight another day.

Mr Sanders, the self-described democratic socialist written off last year, won the most Democratic primary voters in Colorado, Minnesota and Oklahoma in the south keeping his challenge to Mrs Clinton alive.

Mr Trump has won 10 of the first 14 states where Republicans have chosen a candidate in the first month of the presidential election, confounding the political establishment with an insurgent vitriolic campaign that has stirred nationalistic and anti-immigrant feeling.

The billionaire won five southern states - Alabama, Arkansas, Georgia, Tennessee and Virginia - and Massachusetts and Vermont in the north east, adding to his wins in New Hampshire, South Carolina and Nevada in the earlier nominating contests.

Clinton: What a Super Tuesday

“What a Super Tuesday!” Mrs Clinton declared to a raucous crowd in a vacant film studios in Miami in her victory lap for her campaign.

Focusing on the next state contests ahead in Louisiana, Michigan and later states, Mrs Clinton said: “Now this campaign goes forward to the Crescent City, the Motor City and beyond.”

The second-time presidential candidate also had an eye on the likely head-to-head election with Mr Trump in eight months’ time, dismissing the rhetoric on the Republican side that “has never been lower.”

“We know we’ve got work to do. It’s not to make America great again,” said Mrs Clinton, referring to Mr Trump’s slogan. “America never stopped being great. We have to make America whole again.” 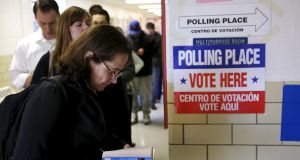 She said that she would keep saying in her campaign that “what we need in American today is more love and kindness.”

Mr Trump, looking beyond the Republican race that he is dominating, jumped on her remarks directed at him.

The businessman dismissed the threat from a panicked Republican establishment that includes the Speaker of the US House of Representatives Paul Ryan and former nominee Mitt Romney who are intent on blocking his march to the party’s nomination.

Rejecting opposition from within the party, Mr Trump insisted that he had “expanded the Republican Party, ” claiming that he had brought higher numbers of voters to the polls in the primary states.

The property and entertainment mogul described himself as a “unifier” at a news conference at one of his golf courses in Florida last night, pledging to make the party “more inclusive” as he pushed the party to focus on beating Mrs Clinton in November’s election.

Mr Trump again poked fun at Mr Rubio, continuing his attacks on the 44-year-old politician he named “the little senator,” describing him as “the big loser tonight” in the Super Tuesday contests.

A dogged Rubio refused to concede defeat, declaring himself an underdog in a “country of underdogs” at a rally in Miami, but someone who would win the nomination no matter how many states it took.

In a later television interview, he continued his attacks on Mr Trump, jabbing the businessman as “a con artist.”

“I don’t deny that there have been some people who have been taken by his message. This man is a world-class con artist,” Mr Rubio told CBS News.

Mr Cruz, without naming his closest rivals, Mr Rubio and Ohio governor John Kasich, who has yet to win a state, pushed the two candidates to drop out of the race so Republicans could coalesce around him as a viable alternative to Mr Trump.

He requested that they “prayerfully consider” their campaigns and warned that Mr Trump would be “a disaster for Republicans, for conservatives and for the nation.”

“Our campaign is the only campaign that has beaten, can beat and will beat Donald Trump,” said Mr Cruz.

Democratic challenger, Mr Sanders, who has pledged to campaign right up to the party’s national convention where the nominee will be formally picked in July, reminded his supporters that he would end Super Tuesday with hundreds of delegates who pick the candidate.

“Let me assure you, we are going to take our fight… to every one of the states,” said Mr Sanders, who has enjoyed a large windfall in fundraising from a wide base of supporters to sustain his campaign.

Mrs Clinton’s Super Tuesday delegate haul of 463 pushed her total to 544 to Mr Sanders’s total of 269. Including “super-delegate” party leaders and elected officials puts her total at more than 1,000 and in the driving seat to win the nomination.

Mr Trump, it is estimated, will have 279 delegates after Super Tuesday to Mr Cruz’s 193, Mr Rubio’s 97 and Mr Kasich’s 27, though these have to be formally determined based on a proportionate distribution around their percentage votes. The nominee needs 1,237 delegates.

The marathon day of state contests gives her more than a third of the 2,383 delegates required to win the Democratic nomination.

The two party frontrunners, along with Mr Rubio, ended the day with events in Florida, eyeing up a state that features in the upcoming nominating state contests. The Sunshine State votes on March 15th.

Florida is not just a delegate-state to win in the two primary battles but will be an important swing state in November’s general election.

Jubilant Clinton supporters left her Miami rally with a spring in their step after her seven-state Super Tuesday win.

“The South is our firewall and tonight it was what we call the SEC - the South East Championship,” said Linda Bird, a Clinton supporter from the Fort Lauderdale area.

“She basically had a clean-sweep and she has the momentum to be our candidate and there’s nothing stopping her now.”

Dr Carmen Harra, a psychologist, author and radio host in Florida, was confident not just for Mrs Clinton’s chances of winning the Democratic nomination but the White House in November’s election.

“This is meant to be our president,” she said. “This is history. A woman is meant to lead America so this is what’s going to happen. Trump cannot come even close to Hillary Clinton. Not in this lifetime.”