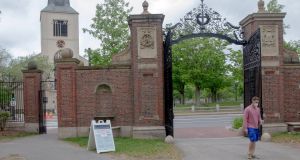 The Trump administration has continued its clampdown on immigration, ordering international students whose classes have switched online because of coronavirus to leave the country.

The Department of Homeland Security updated its rules to stipulate that non-US students studying in American universities are not permitted to stay in the United States if their institutions are operating entirely online.

This applies to students already present in the US, who must now leave the country or enrol in a programme offering in-person status. In addition, the State Department will not issue any new visas to students enrolled in fully online courses in the autumn.

Many American universities have already announced plans to move online for the 2020-2021 academic year, including Harvard University in Massachusetts. The administration’s move may affect hundreds of thousands of students. Last year alone, more than a million visas were issued to international students to study in the United States.

The move comes as top immunologist Anthony Fauci warned in an interview that the US was “still knee deep in the first wave” of the novel coronavirus outbreak. He said that, unlike Europe, “we never came down to baseline and now are surging back up”.

The US’s total number of confirmed cases of Covid-19 is approaching three million, while more than 127,000 deaths have been linked to the virus.

Arizona, which has reported 100,000 cases, said 89 per cent of the state’s intensive care units were full on Monday. The state is now reporting an average of 3,000 new cases a day. Mayor of Phoenix Kate Gallego, a Democrat, called for the federal government to provide more resources for testing, stating that some people had had to wait in line for eight hours to get tested over the weekend.

Florida saw a slight reduction in daily recorded cases, reporting 7,347 cases on Tuesday – down from highs of more than 10,000 last week. Miami-Dade county – the most populous part of the state – announced it was closing restaurants and gyms, going further than state recommendations.

Concerns have also been raised about a planned visit to the White House on Wednesday by Mexican president Andrés Manuel López Obrador. Mr López Obrador was due to travel on a commercial flight from Mexico to Washington on Tuesday. While he said he has been tested and is Covid-free, Mexico has recently seen a surge in cases.

West Virginia joined Texas in announcing a state-wide policy on mask-wearing in a bid to suppress the spread of the virus.

1 Midlands lockdown: Movement restrictions in place for residents of Kildare, Laois and Offaly
2 Masks Q&A: Who has to wear them in shops and what happens if you don’t?
3 Midlands lockdown could extend to other areas, warns Covid-19 team
4 Meat plant clusters may be down to softly-softly approach
5 ‘Draconian’: TDs from across Midlands shocked and angered over lockdown
Real news has value SUBSCRIBE