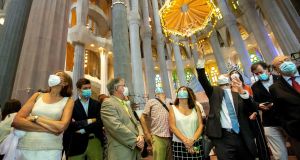 Catalonia enforced a new lockdown on more than 200,000 people on Saturday, after several new outbreaks of the coronavirus were detected.

Residents in Segria, which includes the city of Lleida in northeast Spain, will not be able to leave the area from 12pm (11am Irish time) on Saturday, but will not be confined to their homes as was the case in Spain’s original strict lockdown in March.

“We have decided to confine Segria due to data that confirm too significant a growth in the number of Covid-19 infections,” Catalan regional president Quim Torra told a news briefing.

Regional health ministry data showed there were 3,706 cases in the Lleida region on Friday, up from 3,551 the previous day.

Movement for work will be permitted, but from Tuesday workers entering or leaving the area will have to present a certificate from their employer.

However, Barcelona’s Sagrada Familia reopened on Saturday, giving frontline workers the chance to have the usually tourist-packed landmark to themselves in recognition of their efforts during the pandemic.

People took photos and listened to audio guides after Archbishop of Barcelona Juan José Omella led representatives of healthcare workers into the church. The basilica, designed by architect Antoni Gaudi, closed almost four months ago. But for the next two weekends it will be open to essential workers, including those in healthcare, the police and NGOs, who will be able to explore without the usual crowds.

Spain has registered 205,545 coronavirus cases and 28,385 deaths, making it one of the worst affected countries in Europe.

More than 11 million people around the world are now known to have been infected since the pandemic began, 2.7 million of those in the US, according to data from experts at Johns Hopkins University.

Premier Daniel Andrews said 3,000 people in the towers would go into “hard lockdown”, meaning “there will be no one allowed in ... and no one allowed out”

Five hundred police officers have been dispatched to monitor the nine towers in Flemington and North Melbourne and ensure that the residents do not leave their small and often overcrowded units. Residents living in the flats are among the most vulnerable and heavily policed people in the state, with a high population of new migrants, indigenous people, people experiencing severe mental illness and people who have experienced family violence or homelessness.

South Africa has reported another record daily increase in confirmed coronavirus cases as the health system comes under strain.

The country is a growing hotspot as the pandemic picks up speed in parts of Africa, with confirmed cases climbing to more than 177,000, with a record 9,063 reported in the most recent 24-hour period.

About 30 per cent of cases are in Gauteng province, home of Johannesburg and Pretoria, as the country loosens lockdown measures under economic pressure.

If Africa’s most developed country is struggling to manage the pandemic, that is ominous for less-prepared African nations. Confirmed cases across the 54-nation continent are now above 433,000.

In Russia, the death toll rose above 10,000. The national coronavirus taskforce also reported 6,632 new infections, raising the total for the outbreak to 674,515.

Russia’s caseload is the world’s third largest behind the US and Brazil, but its reported deaths are lower than many other countries. Officials have denied speculation that the figures are being manipulated.

France said it was sending medics to its South American territory of French Guiana to help treat growing numbers of patients in a region where half the population lives below the French poverty level. Infections surged as the virus swept neighbouring Brazil.

Of the roughly 5,000 new cases confirmed across France over the past week, 1,400 were in French Guiana, with a population of just 300,000, according to the health agency.

The military is flying patients from saturated facilities to the French Caribbean island of Martinique for treatment.

In Germany, chancellor Angela Merkel said that “the way our country reacted to the pandemic has largely proved to be right”.

The country has more than 190,000 confirmed cases and has started testing asymptomatic people in care homes.

Dr Merkel paid tribute to the elderly, who like elsewhere in the world, have been particularly hard hit. They also have faced loneliness.

“The most painful thing was surely not to be able to see children and grandchildren for many weeks,” she said. – Agencies