The country is on its knees with unemployment at 30%, power cuts lasting 16 hours a day, and hunger driving many to revolt 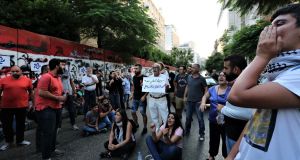 Anti-government protesters in front of the central bank in Beirut, Lebanon, protesting at the dire state of the economy. Photograph: EPA/Nabil Mounzer

The message of the concert, stated director Nayla de Freij, was “Lebanon does not want to die”.

Performed without an audience, the concert, titled the Sound of Resilience, coincided with an 80 per cent plunge in the value of the Lebanese currency and a decision by the government to stem inflation by fixing a preferential dollar rate for importers who provide 90 per cent of Lebanon’s food and other essentials.

After nearly a year of financial and economic crisis, political stasis and strife and four months of Covid-19, Lebanese no longer embrace resilience.

On Monday, activists blocked major highways and clashed with security men who have ceased handling them with kid gloves. Taxi drivers protested over low fares, and teachers over layoffs, while social media critics of the authorities were arrested, belying Lebanon’s long-standing tolerance of free speech.

Labour minister Lamia Yammine put the unemployment rate at more than 30 per cent due to the closure of hundreds of businesses and institutions.

UN experts estimate the poverty level at 45-50 per cent. Hunger drives many to revolt, and some have taken their own lives.

Power cuts last 16 hours a day, forcing consumers to depend on neighbourhood generators or go without as temperatures soar. A shortage of diesel has forced Rafic Hariri International Hospital, the main centre for coronavirus treatment, to ration air-conditioning and postpone non-Covid operations.

The rate of Covid-19 infection, which had been reduced to single digits, has more the doubled following the easing of restrictions and return of expatriates.

Interior minister Mohamed Fahmi reiterated the determination of the technocratic government headed by Hassan Diab to stay on despite challenges mounted by former prime minister Saad Hariri and other sectarian elite figures.

As hopes faded for $11 billion (€9.7bn) in rescue funding from international donors and $9 billion from the International Monetary Fund, Lebanon’s Maronite Catholic patriarch Bechara al-Rai accused politicians of seeking “to hide their responsibility for emptying the treasury and not enacting any reforms”.

Greek Orthodox archbishop Elias Audi asked politicians: “Do you sleep comfortably at night while those under your care starve, and die of thirst and suicide?”