Trump adds to pressure on US attorney general Jeff Sessions

President renews attack on Sessions for recusing himself from Russia inquiry

US president Donald Trump flew to West Virginia to a field full of 40,000 chanting and cheering Boy Scouts to talk about politics, the 'fake media' and Barack Obama. 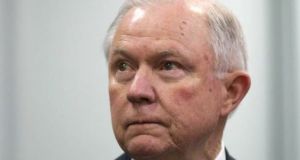 Jeff Sessions: Donald Trump has unleashed a barrage of criticism at him in interviews and on Twitter over the past week. Photograph: Getty Images

The future of US attorney general Jeff Sessions looked increasingly uncertain on Tuesday night as president Donald Trump renewed his attacks on the nation’s top justice official, prompting speculation that Mr Sessions could be forced to resign.

During a press conference at the White House, Mr Trump said he was “disappointed” in the attorney general.

“He should not have recused himself almost immediately after he took office,” he said, referring to Mr Sessions’s decision to step aside from all Russia investigations.

He also said the attorney general needed to be “much tougher” on tackling leaks by intelligence agencies, though he declined to directly answer if he would fire him.

Mr Trump , who repeated his criticisms of the former senator in an interview with the Wall Street Journal, has unleashed a barrage of criticism at Mr Sessions in interviews and on Twitter over the past week.

Jared Kushner did very well yesterday in proving he did not collude with the Russians. Witch Hunt. Next up, 11 year old Barron Trump!

The president has already fired FBI director James Comey, and is known to have been annoyed by Mr Sessions’s decision to step aside from the Russian investigation over an undisclosed meeting with the Russian ambassador.

Mr Sessions was an early supporter of Trump, and one of his few champions in the US Senate when the property tycoon emerged as a presidential candidate.

His decision to recuse himself from the Russian investigation indirectly led to the appointment of Robert Mueller as special counsel, after Mr Sessions’s deputy, Rod Rosenstein, appointed the former FBI chief without informing the president.

Recent reports have claimed Mr Mueller is examining Mr Trump’s business empire as part of his investigation, a development the president previously described as a “red line”.

Mr Trump has been readying himself for the outcome of the investigation, assembling a legal team in addition to White House counsel. His son, Donald jnr, is scheduled to appear at a closed-door congressional committee on Wednesday.

Meanwhile, Senator John McCain made an emotional return to the Senate on Tuesday, 10 days after undergoing brain surgery for a tumour, in order to vote on a key healthcare motion.

Mr McCain’s presence ensured that the vote got over the line after two of the 52 Republican senators opposed it.