McCain makes emotional return to US senate for Obamacare vote

US Senator John McCain, who announced recently that he is battling an aggressive form of brain cancer, made an appearance on the Senate floor calling for more bipartisanship from colleagues on both sides of the aisle. 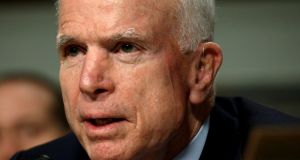 Senator John McCain urged US senators to work together to find a solution to the healthcare problem. Photograph: Kevin Lamarque/Reuters

Senator John McCain made an emotional return to the US senate on Tuesday as Republicans voted to move forward with a debate on a Bill to repeal Obamacare.

Ten days after undergoing brain surgery, Mr McCain travelled to Washington from Arizona to cast his vote in a crucial vote on healthcare.

With two of the senate’s 52 Republicans voting against the Bill, Mr McCain’s presence ensured senate majority leader Mitch McConnell got his motion over the line, with vice-president Mike Pence casting the deciding vote.

Ron Johnson, who was the last Republican to vote, ultimately voted in favour following tense discussions with Mr McConnell on the floor of the chamber. Senators Susan Collins of Maine and Lisa Murkowski of Alaska voted against.

The vote was at one point interrupted as protestors shouting “Kill the Bill! Kill the Bill!” were removed from the chamber.

While the vote signals that the senate will only begin debating the Bill, it was nonetheless a much-needed victory for Mr McConnell, who has struggled to unite his party behind a proposal to repeal and replace Obamacare.

The proposal hammered out by Republicans ahead of the vote was termed by some Republicans as a “skinny repeal” Bill and represents a scaled-back version of president Barack Obama’s Affordable Care Act. Its main proposal is to remove individual and employer mandates but it will also allow the senate to establish a conference with the house of representatives on a replacement Bill, a move that may give the senate more time.

Following the decision to proceed with the vote, 20 hours of debate is permitted under senate rules. Senators began that debate on Tuesday immediately after the result was announced.

Mr McCain, who was first to speak and received a standing ovation when he entered the chamber, urged senators to work together to find a solution to the healthcare problem.

“I’ve voted for the motion to proceed to allow debate to continue and amendments to be offered. I will not vote for this Bill as it is today. It’s a shell of a Bill as it is today. We all know that,” he said, predicting that the Bill in its current form would fail. But he argued that opening debate would allow amendments to be brought forward from both Democrats and Republicans.

“What have we to lose by trying to work together to find those solutions?” he said. “We’re getting nothing done, my friends. Something has to be done.”

He described his role as senator as “the most important job I’ve had in my life”. “I’m so grateful – so grateful to the people of Arizona for the privilege, for the honour of serving here and the opportunities it gives me to play a small role in the history of the country that I love.”

The 80-year-old senator said he planned to stay in Washington for a few days before returning to Arizona at the end of the week to continue his recuperation.

“I have every intention of returning here and giving many of you cause to regret all the nice things you said about me,” he said.

In a statement, Mr Trump – who delayed a press conference with the Lebanese prime minister to listen to Mr McCain’s speech – applauded the Senate “for taking a giant step to end the Obamacare nightmare”.

“As this vote shows, inaction is not an option, and now the legislative process can move forward as intended to produce a Bill that lowers costs and increases options for all Americans. The senate must now pass a Bill and get it to my desk so we can finally end the Obamacare disaster once and for all.”