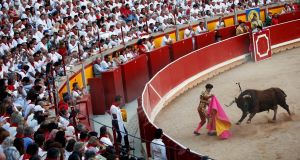 The Balearic Bulls law states that animals must not be harmed or killed in the bullring, with matadors only allowed to use a cape and a stick – and not a sword as is customary – to fight the bull. Photograph: Susana Vera/Reuters

The Balearic parliament has approved a law that radically restricts bullfighting practices on the islands, including banning the killing of the bull, in the latest blow to the Spanish pastime.

The so-called “Balearic Bulls” law states that animals must not be harmed or killed in the bullring, with matadors only allowed to use a cape and a stick – and not a sword as is customary – to fight the bull.

In addition, each bull can only be in the ring for 10 minutes, with a maximum of three bulls per session. Until now, it has been normal for six bulls to be killed in an afternoon’s bullfight, with each often spending more than 10 minutes in the ring. Meanwhile, the law states that the treatment of bulls before and after corridas will be strictly monitored, while the minimum age for spectators is raised from 16 to 18 years old and alcohol is banned from events.

Sanctions for breaking the new law include fines of up to €100,000.

“Little by little the campaign against mistreatment of animals is gaining ground in our society,” tweeted Pablo Iglesias, leader of Podemos, which supported the bill along with other left-leaning parties.

This is yet another setback for the bullfighting industry, which has been on the back foot in recent years. It was hurt by Spain’s economic crisis and is struggling to interest younger people, with an Ipsos Mori poll last year showing that only 7 per cent of 16-24-year-olds supported bullfighting. Some city halls have withdrawn funding for bullfights, and several have started to organise referenda on the issue.

However, the Balearic Bull law could turn out to be short-lived. In 2013, with the tide turning against bullfighting, the Spanish government sought to protect it by law, declaring the pastime part of Spain’s “cultural heritage”.

In the Balearic Islands, Podemos had previously advocated a full ban on any type of bullfighting activity, but ended up supporting this, more nuanced, bill due to the threat of a central government appeal based on that 2013 law. Nonetheless, the government still claims the new legislation violates the constitution.

Miquel Jerez, of the PP’s Balearic wing, said that those backing the new bill “want to ban culture without anyone knowing” and he said he was confident the constitutional court will overturn the new restrictions.

Bullfighting has become something of a political battlefield in Spain and there is a precedent for the Balearic conflict.

Last year the constitutional court overturned a bullfighting ban introduced in Catalonia in 2012, outraging both animal rights activists and nationalists in the region. However, bullfighting has not returned there, with little political appetite for it to do so.