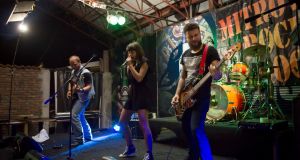 Mitrovica band Proximity Mine, which is made up of ethnic Albanians and Serbs, at the Mitrovica Rock School. Photograph: Flickr

In 1980s Yugoslavia, Mitrovica in northern Kosovo was famous for its metal and its music.

More than 20,000 employees blasted and drilled lead, zinc, silver and gold from deep under Mitrovica, and ran the processing plants that made its vast Trepca complex one of Yugoslavia’s key industrial assets.

Meanwhile, a live music scene flourished among the smoke stacks and slag heaps, offering evenings of escape for weary workers and fuelling their children’s dreams of a future beyond the dangerous pits and filthy smelters.

In Mitrovica’s mines and factories and bars and bands, there was no division between Kosovar Albanians and ethnic Serbs.

But like Trepca’s profits and many of the city’s music venues, those days are long gone, and now Mitrovica is split by the legacy of the 1998-99 war and Serbia’s refusal to accept Kosovo’s declaration of independence 10 years ago this week.

As Yugoslavia began to come apart, one fraying seam ran through Trepca.

On February 20th, 1989, workers went on hunger strike inside the mine to demand that Belgrade’s increasingly nationalist leader, Slobodan Miloševic, revoke plans to scrap Kosovo’s autonomy within the Serbian republic of Yugoslavia.

“It marked the beginning of the end of Yugoslavia and the start of our road to independence.”

He adds: “It was the first time the workers made political and not social demands . . . We wanted to protect the autonomy of Kosovo.”

The strike galvanised Kosovar society but failed to halt Miloševic’s crackdown on what he saw as its growing separatist movement.

Belgrade proceeded to strip powers from local authorities and ramp up security in Kosovo, while sacking almost all Kosovar state employees at Trepca and across the region.

When they sacked us all in August 1990 I started growing a moustache, and said I’d only shave it off when I went back into the mine

Kosovars faced mass unemployment and emigration and a ban on Albanian-language teaching in schools, which prompted them to create parallel structures to provide services and protect their culture.

After Yugoslavia collapsed amid war in Croatia and Bosnia, Kosovar rebels stepped up their own fight to escape Miloševic’s grip in 1998, and a year later Nato bombed Serbia to end its brutal military operation in the region. About 13,000 people died and 1 million were displaced in the conflict, the vast majority of them Kosovars.

“When they sacked us all in August 1990 I started growing a moustache, and said I’d only shave it off when I went back into the mine,” recalls Jashari.

“I was finally allowed back on December 22nd, 1999, and I took my razor with me,” he says, looking at a photograph of himself on that day, wearing a broad grin and bushy moustache.

“I was crying when they took that photo.”

Mitrovica still sits on a faultline in Kosovo, however, located between most of the 90 per cent ethnic Albanian country and the largely Serb areas in the north where Belgrade retains major influence.

Trepca facilities on either side are now run separately by Kosovars and Serbs and employ about one-tenth of the 22,000 who worked here in the company’s Yugoslav heyday.

Just as Serbia rejects Kosovo’s independence declaration of February 17th, 2008, so it also denies the Pristina government’s claim to Trepca, and demands a 75 per cent stake in the slumbering giant with enough ore reserves to last for decades.

Igor Simic, a deputy for Serb List, the main Belgrade-backed party in Kosovo, says Trepca was “established and funded by Serbia, and from money of Serbian taxpayers.

“Serb List will not accept the capture of Trepca. There are a lot of parts of Trepca in the south run by Albanians, and those factories are destroyed with bad management. We will not allow same scenario for Trepca in the north.”

Jashari says he and his local Serb colleagues get on well and help each other solve operational issues at their separate sites.

“But their bosses are causing problems because they insist on this division . . . The status of Trepca is what’s blocking things the most,” he says.

A new board of competent Kosovar and Serb directors and a few years of moderate investment would allow Trepca to boost output rapidly and start making higher-value products, Jashari believes.

“Then living standards would increase because we could create so many jobs, and when people work they don’t focus on politics. It would help the north and south of Kosovo to integrate much faster.”

A healthy Trepca could also slow the outflow of young people from both sides of Mitrovica, a city of 85,000 where unemployment is well above Kosovo’s official national rate of about 30 per cent.

“Most of our students stay here until they finish school and then leave for Belgrade or Pristina,” says Emir Hasani, a musician from the Serb-majority northern Mitrovica.

He works with the Mitrovica Rock School, which runs daily music classes on both sides of the city and helps students form bands that cross the ethnic divide.

Since the school was founded in 2008, Hasani (25) says it has had hundreds of students, “including neo-Nazi punks – lots of different people.

“But after a few months in Rock School, they don’t really talk about [ethnicity] and it becomes normal to play together. Teachers from both sides put together the bands . . . and we try to make everything 50/50 [between Kosovars and Serbs].”

“But now the most active bands are walking across the river for rehearsals . . . friendships have appeared,” Hasani adds.

“Some bands are really open and want their own Facebook and Instagram pages. Before, bands wanted to record but didn’t want to be exposed.”

Until 2016, continuing ethnic tension in Kosovo meant the school’s mixed bands only played together at a summer camp in neighbouring Macedonia.

However, two years ago they held concerts in Pristina and the mostly Serb town of Gracanica, and this year they hope to perform live for the first time in Mitrovica.

“Now there are again two or three places on each side of Mitrovica to see bands play,” says Hasani.

“That’s the history of this city – rock, blues, jazz and everything else – and we’re still proud of it.”