Trump accuses Canada of ‘bragging’ over link with US 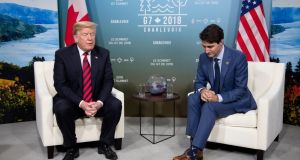 US president Donald Trump doubled-down on Monday on his attacks on Canada’s prime minister Justin Trudeau, accusing Canada of “bragging” about its trade relationship with the United States.

In a series of tweets from Singapore, Mr Trump said “Fair Trade” should now be called “Fool Trade if it is not reciprocal”, adding that Canada had been bragging about making $100 billion in trade with the US and “got caught”.

“Why should I, as President of the United States, allow countries to continue to make Massive Trade Surpluses, as they have for decades, while our Farmers, Workers & Taxpayers have such a big and unfair price to pay?” he tweeted. “Not fair to the PEOPLE of America! $800 Billion Trade Deficit.”

Mr Trump’s comments came a day after he described the Canadian prime minister as “dishonest and weak” and instructed his aides not to sign the final communique from the G7 summit hosted by Mr Trudeau in Quebec.

The US president launched the Twitter tirade from Air Force One on his way to Singapore for his meeting with North Korean leader Kim Jong-un, after he watched the Canadian prime minister’s final G7 press conference.

The intervention marked a new low between the United States and its allies. But as Mr Trump landed in Singapore, several White House aides aggressively backed the president in a series of interviews.

“There’s a special place in hell for any foreign leader that engages in bad faith diplomacy with President Donald J Trump and then tries to stab him in the back on the way out the door,” trade adviser to the president Peter Navarro said on Fox News.

Mr Trump’s attack on the Canadian prime minister – unprecedented by the leader of the United States – was met with anger and dismay in Canada, with many of Mr Trudeau’s political foes stepping in to defend him. “We will stand shoulder to shoulder with the prime minister and the people of Canada, ” said Doug Ford, the recently-elected premier of Ontario.

This was a difficult summit with, at times, some very candid discussions

Former Conservative prime minister Stephen Harper told Fox News that the US president had made a mistake in targeting Canada. “I can understand why President Trump, why the American people feel they need some better trade relationships,” he said. But, he added, “this is the wrong target”.

“This was a difficult summit with, at times, some very candid discussions,” she told the House of Commons. Pointing out that leaders had raised the United States’s recent tariffs on steel and aluminium imports with Mr Trump, she said that multilateral action was the right way to address the problems caused by globalisation. “It cannot be done by taking unilateral action against your partners,” she said.

But US secretary of state Mike Pompeo played down the rift between the US president and America’s long-time allies, which overshadowed the two-day summit in Canada.

“There are always irritants in relationships,” Mr Pompeo told reporters in Singapore.

“I’m very confident the relationships between our countries, the United States and those G7 countries, will continue to move forward on a strong basis. I’m unconcerned about our capacity to continue to do what we need to do.”