Singapore rolls out the red carpet for Kim and Trump roadshows 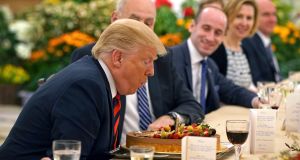 Singapore pulled out all the stops for Tuesday’s historic summit between Kim Jong-un and Donald Trump, with themed cheeseburgers and traditional rice dishes adding a lighter touch to the more serious security lockdown in the tropical city-state.

True to its image as a prosperous and efficient country, Singapore’s organisation of the event has been impressive, especially given that it was cancelled at one point and there were doubts about whether it would take place.

One local restaurant has done a summit-themed version of the popular local nasi lemak rice dish, using dried aged beef and Korean kimchi, to mark the meeting between the two leaders. Then there are Rocket Man tacos, El Trumpo cheeseburgers and Summit iced teas.

I’m proud that it’s in Singapore, the world is watching us

It’s only just under three months since Kim Jong-un made his first foreign visit as North Korean leader, when he went to see Xi Jinping in Beijing.

Kim, who assumed the role on the death of his father Kim Jong-il in 2011, does have some international experience, having gone to school in Switzerland.

The summit has brought a certain amount of traffic chaos to Singapore, but most locals took it in good part.

“I’m proud that it’s in Singapore, the world is watching us,” said one office worker called Ian. At the Paya Labar airbase, many staff were given four days off, for the duration of the summit.

Kim’s delegation flew in on an Air China Boeing 747 and the South Korean Chosen Ilbo newspaper reported that they flew in three separate aircraft. One plane contained unusual cargo – a portable toilet.

“First to arrive in Singapore was an IL-76 transport plane carrying food and other essentials for Kim as well as his bullet-proof limousine and a portable toilet that will deny determined sewer divers insights into the supreme leader’s stools,” the paper wrote.

Kim is reportedly afraid of being shot down while flying and he chose to fly a route to the summit that kept him over Chinese territory as much as possible, rather than risk flying a shorter route over water.

The media centre is in the pits used for Formula One car races, accommodating more than 2,500 journalists, most from overseas, making it the largest media event in Singapore’s history.

The local Straits Times newspaper passed out customised Trump-Kim summit items such as notebooks, bottled water and fans. The press pack also includes a tiny fan that can be plugged in to a smartphone, very useful in the searing midday heat of Singapore.