Top Republican comes to Mueller’s defence amid rumours of firing

John Cornyn says it would be a mistake if Trump fired counsel, as criticism ramps up 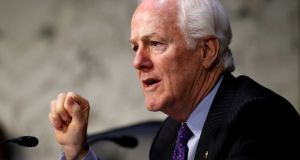 Republican senator John Cornyn: said that he has confidence in Robert Mueller, the former FBI director who is leading an investigation into Russian meddling in the 2016 presidential election. Photograph: Joshua Roberts/Reuters

John Cornyn, the US Senate’s number two Republican, came to the defence of Robert Mueller, saying it “would be a mistake” for US president Donald Trump to fire the special counsel, even as many GOP lawmakers ramp up criticism of his investigation.

Mr Cornyn’s comments on ABC’s This Week on Sunday came as a handful of congressional Republicans have called for Mr Mueller’s firing. Representative Jackie Speier, a California Democrat, said in a radio interview on Friday that the “rumour” sweeping the Capitol was that Mr Trump plans to fire Mr Mueller this Friday, December 22nd. Mr Trump’s lawyer, Ty Cobb, has denied the claim. On Sunday, Treasury secretary Steven Mnuchin and White House director of legislative affairs Marc Short both dismissed the notion that Mr Trump was discussing a firing.

“There’s no conversation about that whatsoever in the White House,” Mr Short said on NBC’s Meet the Press. “I haven’t heard anything about this, any firing,” Mr Mnuchin said on CNN’s State of the Union, adding that it was “obviously up to” Mr Trump to make a final decision.

Some Republican lawmakers have ramped up their criticism of Mr Mueller and the staff working on the investigation. Mr Trump, too, has seized on some of these questions, tweeting that the FBI’s reputation is “in tatters”.

“The public trust in this whole thing is gone,” representative Jim Jordan of Ohio said last Wednesday during a House Judiciary Committee appearance by deputy attorney general Rod Rosenstein, who appointed Mr Mueller. During the hearing Mr Rosenstein defended Mr Mueller and said the investigation “is not a witch hunt”.

Mr Cornyn said that he has confidence in Mr Mueller, the former FBI director who was named in May to lead an investigation into Russian meddling in the 2016 presidential election. Still, he joined many of his Republican colleagues in casting doubt on the integrity of the investigation, repeating that Mr Mueller should “eliminate” team members who had supported Democrats or were critical of Mr Trump. “I would just think he would be concerned about the appearance of conflicts of interest that would undermine the integrity of the investigation,” Mr Cornyn said.

Mr Mueller recently removed an FBI official from the investigation as soon as his anti-Trump text messages were discovered. The recipient of the texts, who was also on Mr Mueller’s team, had left by the time the exchanges were discovered. “Mueller needs to clean house of partisans,” Mr Cornyn said on Saturday in a Twitter message to a Bloomberg reporter. On Saturday, a lawyer for Mr Trump’s presidential transition complained in a letter to two congressional committees about what he described as the “unlawful production” of tens of thousands of transition emails to Mr Mueller’s team by employees at the federal General Services Administration.

Some of the materials are “susceptible to claims of privilege”, the lawyer, Kory Langhofer, said in the letter. Mr Mueller’s office defended the way the emails were obtained. “When we have obtained emails in the course of our ongoing criminal investigation, we have secured either the account owner’s consent or appropriate criminal process,” Peter Carr, a spokesman for the special counsel’s office, said in a statement to the New York Times and other outlets.

Doug Jones, the federal prosecutor and Democratic senator-elect from Alabama, said he’s confident the investigation is proceeding without bias and called Mr Mueller a “consummate professional”. “I would be very surprised if Bob Mueller did anything that illegally obtained or anything like that,” Mr Jones said on CNN’s State of the Union on Sunday, days after his upset win over Republican Roy Moore.

Senator James Lankford, an Oklahoma Republican, said on CBS’s Face the Nation that “it’s serious any time you have an investigator within an investigation that has an obvious political bias, whichever direction that goes”. Regarding the the presence of an official critical of Trump, he added: “I don’t think it taints the entire process. But it certainly taints that season of it.” – Bloomberg