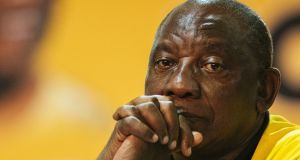 By Sunday evening the race was between ANC deputy president Cyril Ramaphosa, above, and Nkosazana Dlamini-Zuma. Photograph: Waldo Swiegers/Bloomberg

South Africans must wait until Monday to find out who the new leader of the ruling African National Congress will be, after delegate registration disputes delayed the voting process, which should have finished early on Sunday evening.

South Africa’s ruling party disqualified 410 delegates from voting in its 54th national conference, which was convened on Saturday to elect outgoing ANC president Jacob Zuma’s successor, and to fill other top posts.

The outcome of the registration process appeared to undermine the chances of frontrunner Nkosazana Dlamini-Zuma of becoming the ruling party’s next leader, as a majority of those barred came from ANC structures in three provinces that had backed her candidacy.

Many of the ANC delegates were banned after the party’s leaders put into effect three court judgments made last week that disqualified a number of delegates from the provinces Free State‚ KwaZulu-Natal and the North West.

The ANC provincial structures’ respective elective conferences as well as branch general meetings were found to have been improperly constituted by the courts.

In addition, branch delegates were also disqualified for failing to meet party requirements for participating in the conference, which is taking place at the Nasrec Expo Centre in Soweto, Gauteng Province.

On Sunday ANC deputy secretary-general Jessie Duarte said that it had adhered to the court rulings so there would be less chance that the election’s outcome would be challenged by disgruntled party members.

“It’s not unusual to delay credential registrations, we do it for the credibility of the process. As you well know, this is the one point that people use to have court interdicts and court cases and injunctions, and we’ve been extremely careful not to open any possibility that will take us in that direction,” she said.

As a result of the disqualifications, only 4,776 voting delegates were eventually registered, rather than the 5,186 expected to participate beforehand.

That means that the successful candidate, who will lead the ANC for the next five years and be its presidential candidate in 2019 general election, must secure 2,384 votes to win.

More than 90 per cent of the voting delegates come from the party’s branch structures, with the remainder coming from the youth, women and veterans’ leagues, as well as the provincial and national leadership structures.

Although there were initially seven presidential candidates vying to succeed Mr Zuma, by Sunday evening the race was between ANC deputy president Cyril Ramaphosa and Ms Dlamini-Zuma.

Mr Ramaphosa, who is also South Africa’s deputy president, is a lawyer and former trade unionist who became a billionaire businessman in the post-apartheid era.

Backed by the anti-Zuma faction in the ANC, he has promised to tackle the endemic corruption that has undermined the party under Mr Zuma.

Ms Dlamini-Zuma, the president’s ex-wife, has led different government ministries since the ANC came to power in 1994. She is seen as a competent technocrat and a traditionalist by nature.

Mr Zuma, who has been widely criticised for the manner in which he has led the ANC and government over the past five years, also gave his final address as leader of the ruling party on Saturday afternoon.

He lashed out at his critics inside the former liberation movement, saying they were partially responsible for the ruling party’s dramatic slide in popularity among the voting public under his watch.

Mr Zuma maintained that factionalism was “the biggest threat to the organisation”, and that the emergence of these splinter groups effectively meant opposition parties now reside within the ANC.

Early on Saturday, in an apparent bid to secure a positive legacy, Mr Zuma also announced that his government would subsidise free higher education for poor and working-class students,

“Students categorised as poor and working class … will be funded and supported through government grants not loans,” he said.

However, he made no indication about where the money to pay for it would come from.