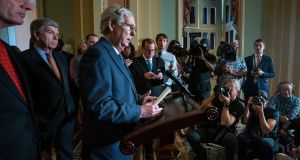 Upon dismissing his chief of staff in 1973, Richard Nixon said that he loved him “like my brother”. The line seems too easy until you remember that the US president had seen two of his own die young. Nixon’s bond with H R Haldeman and other colleagues fortified him well into the Watergate crisis that brought him down.

Excluding his in-laws and blood relations, is there anyone in Washington of whom Donald Trump would make the same comment? Is there anyone who would say it of him? The point is not about the president’s likeability or otherwise. It is about his level of support as his own impeachment ordeal nears.

Since the Ukraine scandal emerged, it has been natural to assume total Republican commitment to Trump. Such is the tribalism of a riven nation.

There is another scenario, though, and it does not stop at one or two Republicans peeling away. Instead, to save itself, the GOP establishment might desert Trump as swiftly and unexpectedly as it bent the knee to him in 2016. Whether this manifests as the Senate supermajority needed for his ousting is still hugely doubtful. But there are other kinds of defiance: a staff exodus from the White House, senatorial refusals to defend him, the turning of implicated parties on one another.

Sceptics will say this requires the party to wake up from its cringing passivity. But it has been doing that, in fits and starts, for a while now. A dozen Republican senators voted to end the president’s state of emergency over the Mexican border. Individuals in the executive have tried to subvert him. Others refused to scuttle the probe into Russian meddling in US politics.

Senator Mitt Romney has usurped former Ohio governor John Kasich as the party’s most disapproving grandee. Congressional members have quit and invited the world to infer why. Trump was being challenged for the GOP nomination even before Ukraine-gate. Parts of the conservative ecosystem – think tanks, journals – have bucked Trumpism and paid a toll in lost patrons.

I am not suggesting another volume of Profiles in Courage here. But Profiles in Sheepish and Occasionally Effective Dissent would not struggle for case studies. In parts of the country, support for Trump is as bottomless as the hype implies. In Washington, it can be gossamer-thin. Aside from any personal dislike of him, his two dearest projects – protectionism and lower immigration – jar with conservatives reared on laissez-faire.

Some Republicans are even willing to put a number on the closeted apostates. Were the vote held in private, “at least 35” GOP senators would choose to convict the president, according to Jeff Flake, who was one of their number until January. They will not, of course, but the chances of a different and still lethal rebellion are underrated.

What might cause it? Were public opinion to turn decisively for impeachment – the first polls merely lean that way – it would focus minds. Were Trump’s behaviour to deteriorate, his staff would have to decide whether to risk ensnarement in the mess. What put the likes of Haldeman in jail was not Watergate itself but the efforts to cover it up. And that was under a president with some grounding in the rules. Trump, a neophyte in Washington, often appears sincerely dumbstruck by the illegality of certain actions.

Trump must also do without his favourite recruiting sergeant. In 2016, hatred of Hillary Clinton enlisted wavering conservatives to his cause. Whichever Republican opposed her in the presidential election could count on almost inexhaustible forbearance from the right. Three years on, she is a non-factor. Perhaps conservatives can summon the same dread for the prospect of President Elizabeth Warren (who is some way to her left) or President Joe Biden. Otherwise, Trump cannot terrorise them into loyalty merely by brandishing the alternative.

The president’s transactional world view always implied the possibility of his own abandonment. Once he stops being useful to people, by his own logic, they have no reason to stay loyal. He does not offer a relationship much deeper than – what an airing this Latinism is getting – quid pro quo. For the time being, he still gives eminent Republicans something for their something. He electrifies a constituency they hardly understand. But they must now weigh this against a scandal that even the gamest loyalists among them are struggling to rebut. They must weigh it against the subpoenas being couriered ominously around Washington.

Whether to support Trump is becoming a finer and finer calculation for Republicans. And calculation, not fraternity, is all it ever was. – Copyright The Financial Times Limited 2019