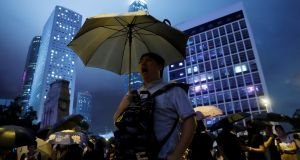 Hong Kong’s civil servants staged an unprecedented anti-government rally on Friday night and pledged to go on strike next week as tensions over an extradition Bill continue to escalate and the city gears up for four straight days of protests.

Chanting “Free Hong Kong! Strike!” tens of thousands of government workers shrugged off the pouring rain and clogged the central business district on Friday night to lend their support to the two-month protest movement that has rocked the financial hub.

They are calling on all members of the civil service to go on a general strike on Monday and join one of seven simultaneous rallies planned for the city that day, despite government warnings of severe repercussions if staff violate rules on political neutrality.

In response to the threat of a civil service strike, the government released a “solemn statement demanding that civil servants remain loyal to the chief executive and her administration”, and warned they would “seriously follow up” if civil servants were considered to have breached the code of conduct or took part in political events that could be construed as a conflict of interest.

Holding a sign that said, “Liberate Hong Kong. The revolution of our time”, one protesting civil servant at the rally said: “We are Hong Kongers first. We serve the people first, not the government.”

The way the government tried to push through the extradition Bill was ‘disgraceful’, said the woman, who asked not to be named. “The government is not listening to the people, and then when the people complain they bully the people. We must stand up now or there will be no more Hong Kong.”

The protests were sparked by a government attempt to push through an extradition Bill that could see Hong Kong citizens facing trial in mainland Chinese courts. While that Bill has been suspended following a massive outcry, it has not been formally withdrawn as the protesters are demanding.

They are also calling for a full independent inquiry into the government’s and police’s handling of the protests, an amnesty for any protesters, and wider democratic reforms so they can directly elect the city’s leaders.

Illustrating the cross-section of support the protests enjoy, on Thursday evening a large group of bankers and financiers staged a rally, while on Friday afternoon thousands of doctors, nurses and medical workers took to the streets to show their support.

Unsanctioned marches are planned for Saturday and Sunday, as well as the city-wide rallies on Monday. In recent weeks the levels of violence has surged as police frequently deploy rubber bullets and tear gas to disperse projectile-throwing protesters.

On Thursday police said they arrested eight people on charges of possessing a suspected petrol bomb and other offensive weapons. One of those arrested was Andy Chan (28), founder of the Hong Kong National Party, which was banned in 2016 for advocating Hong Kong’s independence on the grounds it posed a national security threat.

Following clashes with the police at a recent rally 44 people were arrested for rioting, a charge that carries a 10-year prison sentence.

At another protest a mob of pro-government gangland Triad members attacked the crowd with sticks and other weapons, putting 45 in hospital. Pro-democracy activists have accused the police of standing by and not intervening as the thugs beat people, a claim the police reject.

Relations between the police and protesters have become increasingly hostile over the past few weeks. In a sign that people are expecting things to flare up again this weekend, social media reports said that there has been a run on gas masks across the city this week and now most shops are sold out.