Thousands to join protests at inauguration of Donald Trump 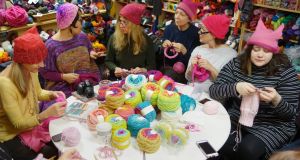 Women at Knitty City in New York making “pussyhats” in preparation for demonstrations in Washington DC and New York to protest against the election of Donald Trump. Photograph: William Edwards/AFP/Getty Images

Tens of thousands of people are expected to join protests in Washington DC and beyond as Donald Trump becomes the new president of the United States.

Security officials say 99 groups – for and against Mr Trump – plan to demonstrate in the US capital over three days, including 63 on the day of the inauguration ceremony.

The largest demonstration will take place in Washington on Saturday – the day after Mr Trump is sworn in as president – when some 200,000 people are expected to join a women’s march.

Celebrities including Scarlett Johansson, Amy Schumer and Patricia Arquette have pledged they will attend the protest, while similar events are being planned in a number of US cities including Los Angeles and Park City, Utah.

Ugly Betty star America Ferrera, who is helping to organise the Washington protest, said: “Since the election, so many fear that their voices will go unheard. As artists, women, and most importantly dedicated Americans, it is critical that we stand together in solidarity for the protection, dignity and rights of our communities.”

Women’s marches are also planned in British cities including London and Edinburgh.

Other protests are being staged by Disrupt J20, which says it will try to shut down or cause delays at security checkpoints at the inauguration ceremony in Washington. The group also plans to march from Columbus Circle outside Union Station at noon local time, the same time Mr Trump is being sworn in as America’s 45th president.

Anti-war group the Answer Coalition is planning demonstrations at the US Navy Memorial and Freedom Plaza near the White House.

The group said speakers at the rally will include 2016 Green Party presidential candidate Jill Stein.

Homeland security secretary Jeh Johnson has said 28,000 officials will be involved in the security operation in Washington, including more than 3,000 police officers and 5,000 members of the National Guard.

An estimated 700,000 to 900,000 people are expected in the city to watch Mr Trump become president on Friday, compared to a crowd of 1.8 million that watched Barack Obama’s inauguration in 2009.