Iraqi forces gain control of eastern half of Mosul from Isis

Despite US-led air strikes, Islamic State still holding out in other areas of Iraqi city 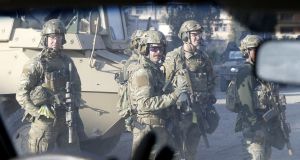 US army personnel gather at the University of Mosul during a battle with Islamic State militants on Wednesday. Photographer: Reuters/Muhammad Hamed

Iraqi forces have driven Islamic State from most of the eastern half of Mosul city, officials said, as the prime minister vowed that final victory in the three-month offensive was imminent.

The head of Iraq’s counter-terrorism service, which spearheaded the advance into the city, said on Wednesday that his troops had taken control of the eastern bank of the Tigris river that bisects Mosul, capturing all the areas they were tasked with controlling. Other military forces continue to fight Islamic State militants in the northeastern districts.

If the campaign to retake Iraq’s second city succeeds, it would deprive the jihadi group of its last main stronghold in the country. Retaking Mosul is a priority for Baghdad and was an important part of US foreign policy under the Obama administration.

Islamic State, also known as Isis, tried to build its so-called caliphate across Iraq and neighbouring Syria, where it has recently made advances in some areas. But in Iraq, the group holds less than 10 per cent of the territory it controlled when it stunned the world by capturing Mosul in 2014 and sweeping through northern Iraq.

“The promise of final liberation and complete victory approaches in Mosul with the success of the efforts of our heroic forces by completing its basic plan for clearing the left [eastern] bank in most axes and liberating the city centre of Mosul,” said Haidar al-Abadi, the prime minister, in a statement on Wednesday.

The battle for Mosul began last October, but the amount of time it has taken to recapture the eastern side of the city – larger yet considered less difficult than the west by some – worried some observers. Iraqi forces struggled to push forward, hindered by the city‘s narrow streets and neighbourhoods filled with civilians, where they sometimes found themselves fighting the enemy from several directions.

A recent push by Iraqi forces and the US-led international coalition, however, enabled a quick succession of advances in recent weeks. Bridges across the Tigris were bombed by coalition air strikes to block Isis reinforcements, and Iraqi forces have grown more adapt at handling the string of car bombs often sent their way during battle.

Lieutenant General Talib Shaghati, head of the counterterrorism forces, said capturing the western half of the city would be easier, despite earlier arguments by some military analysts that the western districts would be more difficult because they are more densely packed with residents and have a population suspected to have more loyalties to Isis.

US officials said recent advances were because of the increased deployment of US forces alongside Iraqi troops and counterterrorism forces inside Mosul, a move designed to improve co-operation and operations.