Thousands gather for US gun rights rally in Virginia 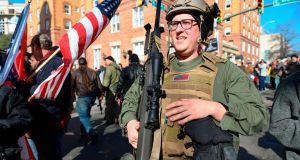 Thousands of gun rights activists from around the US have rallied peacefully in Virginia, protesting against plans by the state’s Democratic leadership to pass gun control legislation.

The size of the rally in Richmond and the expected participation of white supremacists and fringe militia groups raised fears that the state could see a repeat of the violence that exploded in 2017 in Charlottesville.

But the rally concluded uneventfully and the mood was largely festive as attendees — many carrying military-style rifles — spilled into the streets, chanting “USA” and waving signs denouncing Democratic governor Ralph Northam.

Authorities said there had been no reports of arrests or injuries.

The protesters came out in the thousands despite the low temperature to send a message to legislators, they said.

Mr Northam was a particular focus of the protesters’ anger. One poster showed his face superimposed on Adolf Hitler’s body.

But Democratic legislators said the rally would not affect their plans to pass gun control measures, including universal background checks and a limit of one handgun purchase a month.

“I was prepared to see a whole lot more people show up than actually did and I think it’s an indication that a lot of this rhetoric is bluster, quite frankly,” said Chris Hurst, a gun-control advocate in the Virginia House of Delegates, whose TV journalist girlfriend was killed in an on-air shooting in 2015.

Many of the protesters wore camouflage. Some waved flags with messages of support for Donald Trump. The president in turn tweeted support for their goals.

“The Democrat Party in the Great Commonwealth of Virginia are working hard to take away your 2nd Amendment rights,” he tweeted. “This is just the beginning. Don’t let it happen, VOTE REPUBLICAN in 2020!”

Virginia State Police, Virginia Capitol Police and Richmond Police had a heavy presence, with officers on rooftops and others patrolling in cars and on bicycles.

Authorities were looking to avoid a repeat of the violence that erupted in Charlottesville during one of the largest gatherings of white supremacists and other far-right groups in a decade.

Attendees brawled with counter-protesters, and an avowed white supremacist drove his car into a crowd, killing a woman and injuring dozens more.

Police faced scathing criticism for what both the white supremacist groups and anti-racism protesters said was a passive response.

In contrast to Charlottesville, there was little sign of any counter-protesters challenging the gun rights activists. – AP