‘She wouldn’t hang my picture’: Trump again hits out at US ambassador

US president Donald Trump has hit out Marie Yovanovitch, the former US ambassador to Ukraine, after she gave evidence in the impeachment inquiry against Trump. Video: Fox News 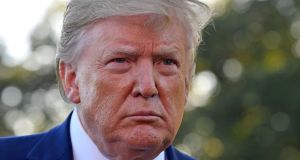 President Donald Trump: “She’s in charge of the embassy. She wouldn’t hang it. It took like a year and a half or two years to get the picture up.” Photograph: Nicholas Kamm/AFP via Getty Images

US president Donald Trump has continued his attacks on ousted US ambassador to Ukraine Marie Yovanovitch and other witnesses in the House impeachment inquiry into whether he abused his office to pressure Ukraine to announce an investigation into political rivals.

“The ambassador, the woman” was an “Obama person”, Mr Trump said in a phone interview with the Fox and Friends programme on Friday morning. “I said, why are you being so kind? Well, sir, she’s a woman, we have to be nice. She’s very tough, I heard bad things.”

Mr Trump also maintained that he didn’t know US ambassador to the European Union Gordon Sondland well. Mr Sondland testified that there was a “quid pro quo” between Mr Trump’s pressure on Ukraine to investigate the family of former vice-president Joe Biden, a potential 2020 Democratic opponent, and assistance to Kyiv.

The president also questioned the veracity of David Holmes, a state department employee in the embassy in Kiev, who testified he overheard Mr Trump on a phone call to Mr Sondland asking about the investigations.

Mr Trump said he wanted a full trial in the Senate and floated calling witnesses such as House intelligence chairman Adam Schiff. But, when asked if he expected to be impeached by the House, he demurred.

“I think it’s very hard for them to impeach when they have absolutely nothing,” he said.

The House intelligence committee on Thursday wrapped two weeks of public hearings that featured 12 career diplomats, civil servants and political appointees who described how Mr Trump, through his personal lawyer Rudy Giuliani, tried to solicit a foreign government to conduct investigations that could potentially help him in the 2020 presidential election.

Mr Holmes and former National Security Council aide Fiona Hill testified on Thursday that Ukrainian officials understood that they would only get a White House meeting and security aid in exchange for investigations into Mr Biden’s family and a debunked theory that Ukraine meddled in the 2016 US election.

The intelligence panel hasn’t yet said whether it will hold further public hearings in the impeachment investigation into Mr Trump or work with other committees to develop articles of impeachment. – Bloomberg