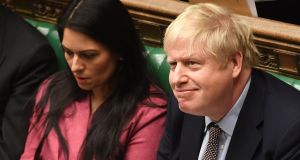 There was never any doubt that Boris Johnson would express support for Priti Patel at prime minister’s questions on Wednesday, but the emphatic nature of his defence went beyond the call of duty or necessity. The home secretary is the subject of a cabinet office investigation after officials accused her of bullying staff in her current department and in two previous ones.

But with Patel sitting next to him wearing a fuschia dress and her signature smirk, the prime minister leapt to his feet to defend her against Jeremy Corbyn’s criticism.

“Of course, it is right that there should be an investigation into any allegations of bullying, and that is what the cabinet office and Sir Alex Allan will be doing. Since the right honourable gentleman mentions the home secretary, let me just remind him that she is keeping this country safe by putting in place record numbers of police officers, she believes in stopping the early release of offenders, and she is bringing in an Australian-style, points-based system to tackle our migration crisis. The right honourable gentleman would scrap stop and search, he believes in getting rid of our security services and he certainly would not tackle our immigration system,” Johnson said.

Johnson used the same formula in response to every question about Patel’s behaviour, referring briefly to the investigation before praising her role in the home office.

His choice of Patel for one of the great offices of state puzzled many at Westminster and in Whitehall, where she had a poor reputation as a minister, with officials whispering that she was not intellectually up to scratch. But her image as a hardline Brexiteer who is determined to get tough on criminals and illegal immigrants is popular among some of the voters that make up the new Conservative coalition.

For some in Johnson’s circle, the civil service represents a hostile element bent on thwarting the radical change his government is committed to on everything from foreign and defence policy to the economy. But the charge sheet against Patel is now so long and some of the allegations date back so far that it is difficult to sustain the claim made privately by some Conservatives that the accusations are part of an orchestrated campaign by officials to frustrate the government.

Even if she survives the cabinet office investigation, Patel will find herself in a perilous place: the home office is such an accident-prone department that most of her recent predecessors have had to leave it abruptly. And when Patel is tripped up by events, her officials could decide not to rush in but to sit back and let them take their course.