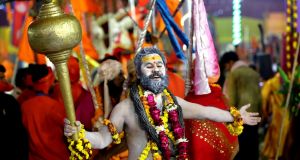 A Hindu holy man dances holding a mace as he arrives for a ritualistic dip in Prayagraj, India. Photograph: AP Photo/Rajesh Kumar Singh

Tens of thousands of Hindu pilgrims took a “sin-cleansing” but freezing dip just before sunrise on Tuesday at the confluence of the sacred Ganges and Yamuna rivers in northern India, in what is possibly the world’s largest religious festival.

Led by a group of naked Hindu ascetics with long hair, flowing beards and ash-smeared bodies, of the holy warrior Naga sect, huge crowds jumped into the icy waters at the start of the eight-week long Kumbh Mela or Festival of the Urn at Prayagraj (formerly Allahabad), 700km southeast of New Delhi.

Chanting prayers, thousands of devotees, including women and children, immersed themselves up to their waists in the river and poured water over their heads as they faced the rising sun.

Saffron-robed priests carrying tridents, a symbol of their god Lord Shiva, chanted prayers and blew on conch shells as they accompanied the devout to the bathing ghats – steps along the riverbanks into the water – spread across 8km.

The bathing ritual lasted the entire day until sunset, during which thousands of boats ferried pilgrims to the spot where the Ganges and Yamuna are believed to converge with the mythical subterranean Saraswati river, which in ancient Indian texts symbolises man’s knowledge and learning.

Many Hindus believe that bathing in these waters during Kumbh Mela – which dates back to AD 643 and takes place every 12 years – absolves them of sin and ensures salvation from the endless cycle of life,death and rebirth. Ancient texts maintain that bathing here during this propitious period guarantees immortality.

More than 80 per cent of India’s population of 1.3 billion are Hindus, and many are deeply religious, ritualistic and live according to ancient traditions and beliefs. Festival organisers expect at least 150 million people to attend the event, which ends on March 4th. A temporary tent city spread over 32 sq km has been erected to accommodate such a large mass of people.

There are over 300km of roads, 122,000 toilets, scores of bridges criss-crossing the rivers and some 600 kitchens, many distributing free food the entire day. Many poor pilgrims sleep in communal tents and others in the open, braving the cold as temperatures plummet to freezing at night.

Hundreds of special trains are ferrying pilgrims to the event and more than 30,000 police and paramilitaries have been deployed to provide security and to manage crowds. Some 15 inter-connected lost-and-found camps have been set up, and their announcements regarding thousands of lost persons, especially children, are relayed across the entire riverfront.