Koreans have heard it all before, but this time an unsteady hand sits in the White House 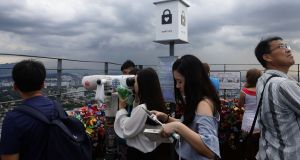 People look out from the observation platform in front of a fence at N Seoul Tower, located at the top of Mt Namsan in central Seoul. Photograph: Chung Sung-Jun/Getty Images

As the war of words continues between US president Donald Trump and North Korea, the people who might ultimately pay the price of their posturing, should events run out of control, are remaining resolutely calm.

“Don’t worry, nothing’s going to happen,” said a senior official with a Seoul-based UN agency. At the same time, however, she acknowledged that should events ratchet up to an all-out war, “there won’t be a Seoul left”.

A crisis that erupted this week when Mr Trump threatened to hit North Korea with “fire and fury like the world has never seen” intensified yesterday when the US president continued his rhetoric.

The striking first impression on listening to people here is the degree to which they feel that they’ve heard it all before – the shouting, the throwing shapes, the bellicose threats – and yet experience has shown that life has gone on regardless.

On Friday, the South Korean capital simply went about its business, the only thing really bothering people being the traffic and the humidity. There are no screaming headlines in newspapers here, no TV channels hyping up the tension, and no public notices advising what to do if the worst comes to the worst.

A clue as to why not is to be found in the shelter signs, permanently on display at the entrances to many escalators leading down to metro stations, underground shopping centres and pedestrian underpasses. Everyone already knows what to do if the bombs start falling.

“We’ve had this for so long,” said the UN official, a Korean national, who asked not to be named. “Long decades of similar incidents.”

But there is a difference this time, one that is on people’s minds but which they are hesitant to articulate.

It is that while three generations of a cult-like, dynastic and threatening dictatorship has existed across the frontier only 25 minutes by road from Seoul, a steady hand has always held sway in Washington, South Korea’s long-standing and hitherto calm ally.

Late on Thursday, Mr Trump, speaking at his golf club in Bridgewater, New Jersey, built on his “fire and fury” remarks, saying “maybe that statement wasn’t enough” and warning North Korea “better get their act together or they’re going to be in trouble like few nations have ever been in trouble”.

In separate comments, he said that if North Korea attacked the Pacific island of Guam, as Kim has threatened to do, “things will happen to them like they never thought possible, okay?”

“When Kim was making all the noise, no one was really paying attention,” said the UN worker, “but when Trump spoke, I thought, ‘okay, maybe I should stock up’.”