Snowstorm set to hit states from Virginia to Massachusetts on Thursday 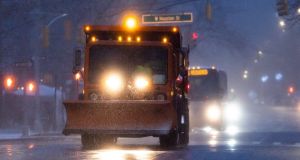 Treacherous weather could bury parts of the eastern US in snow, ice or flooding and cause power outages. Photograph: EPA

Joe Biden and Mike Pence are set to receive the Covid-19 vaccine soon as rollouts of the first doses continue nationwide, despite fears a monster snowstorm could hamper delivery efforts.

The US has also suffered its deadliest day of the pandemic so far. A total of 3,019 people died because of coronavirus in the last 24 hours, the third highest total since the first cases were recorded in the US as far back as January.

Mr Biden said on Tuesday that Dr Anthony Fauci, the nation’s top infectious-disease expert, advised him to get the vaccine “sooner than later”. Biden has said that he wants to keep frontline healthcare workers and vulnerable people as the top priority as the vaccine is rolled out throughout the country.

But he has also noted the importance of him getting the vaccine publicly to build confidence among Americans to get vaccinated, saying: “I don’t want to get ahead of the line, but I want to make sure we demonstrate to the American people that it is safe to take.”

Meanwhile, shipments of the vital coronavirus vaccine around the US face delay as a monster winter storm pummels states from Virginia to Massachusetts.

Now deliveries of more of the first vaccine approved for use in the US, via the Pfizer-BioNTech pharmaceutical partnership, could be held up.

Treacherous weather could bury parts of the eastern US in snow, ice or flooding and cause power outages, hazardous travel conditions, or even tornadoes, according to the National Weather Service, threatening all forms of transportation being used by the vaccine manufacturing facilities, centred in Michigan, as they fly and truck vials around the country.

The storm, which is set to be a record for December and hit a region stretching from Virginia to north of New York City by late afternoon on Wednesday, was poised to drop as much as 60cm of snow in some places by Thursday.

In Pennsylvania, the governor, Tom Wolf, issued a winter weather emergency proclamation but still assured locals that he wouldn’t allow the storm to thwart vaccination efforts.

Coronavirus cases have surged in the state in recent weeks, even as the virus-fueled recession has left more than a million workers there claiming jobless benefits.

“Our team is ready to work collaboratively to address any issues that arise with vaccine transport and distribution,” Mr Wolf said on Tuesday.

As New York City – one of the nation’s first Covid-19 hotspots – battles another serious spike in infections, the mayor, Bill de Blasio, still expected the vaccine to be delivered and administered there, too.

“There’s nothing about the storm at this point that should disrupt the supply of vaccine coming in,” he said.

In less than a year, the pandemic has killed more than 300,000 people in the United States, handicapped entire industries, and left millions behind on their rent payments or without enough food to eat.

A second vaccine by Moderna is also apparently nearing approval by the FDA, and could be approved for emergency use as soon as this week.

The FDA also issued new guidance that could help stretch the existing Pfizer vaccine doses. After hospitals and pharmacies noticed that some vials of the Pfizer vaccine contained extra doses, the FDA clarified that it is acceptable to use up the vials. The move could potentially expand the supply by up to 40 per cent, Politico reported.

Dr Fauci, the leading infectious diseases official in the US, has warned that the crisis’s worst moments may still be to come. – Guardian