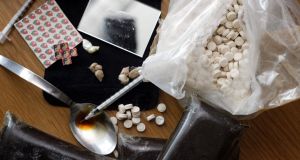 Scotland’s drug-related death toll has risen to another grim record, as long-delayed figures published on Tuesday revealed a death rate more than 3½ times that of the UK as a whole and higher than those reported for all EU countries.

The public health emergency, which was the subject of political deadlock between the Holyrood and Westminster governments over drug legislation before the pandemic, was condemned by experts as a “national tragedy and disgrace”.

There were 1,264 drug-related deaths registered in Scotland in 2019, an increase of 6 per cent from 1,187 in 2018, according to the National Records of Scotland, which published the figures six months later than planned because of a massive backlog in processing toxicology results and Covid-related delays.

Nearly seven in 10 of those who died were male, although there was a significant increase in the number of women dying, and more than two-thirds were aged 35-54.

Heroin, morphine or a combination of both were implicated in more deaths than in any previous year, and more than half of the total. There was also a significant rise in the number of deaths involving street benzodiazepines, which were recorded in two out of every three deaths.

Scotland has seen a surge in use of street Valium, manufactured on a large scale and at unpredictable strengths by criminal gangs. It sells for as little as 50p and is often combined with heroin.

Peter Krykant, a community activist who has risked arrest to set up a safe injecting facility in the back of a van for addicts in Glasgow, said the latest figures were “absolutely devastating”. Glasgow city council, backed by the Scottish government, has been calling for legal powers to pilot a drug consumption room for years, but with drug laws reserved to Westminster, the home office has consistently dismissed the proposal.

Mr Krykant added that his message to politicians remained unchanged: “People are dying because they are not connected to front-line services. The Scottish government cut funding for those in 2016, and we need more investment.”

He plans to park his van, which has been supervising safe injecting since the summer, outside the Scottish parliament in Edinburgh on Wednesday to encourage MSPs to view the facility.

“We need politicians who will take responsibility for what they do have the powers to do. We also have to remember that behind every death figure is a family, someone’s loved one.”

Since the last batch of drug-related death figures were released in July 2019, there has been a stream of initiatives and reports from the Commons’ Scottish affairs select committee, the Scottish government’s drug deaths task force and summits convened by both the UK and Holyrood governments in Glasgow, before most activity was overwhelmed by the pandemic.

But there has been growing anger among charities and specialists at what they see as political inertia beyond this high-level talk on both sides of the border. Many are frustrated that improvements that could be made immediately are overshadowed by wrangling about Westminster’s intransigence in refusing to devolve drug laws to Scotland.

David Liddell, Scottish Drugs Forum’s chief executive, warned: “None of us should regard these preventable deaths as acceptable or as anything other than a national tragedy and disgrace. The need for change is obvious and that change is long overdue.”

Mr Liddell said that new treatment standards for Scotland – that insist people gain quick access to treatment, have a choice of medication that best suits them, get the support they need to stay in treatment, and access to any other supports they may benefit from – were bringing improvements. “But we must quicken the pace of change.” – Guardian