Trump threatens to close government again if wall not funded 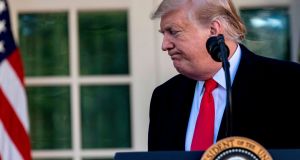 ‘It’s less than 50-50’: US president Donald Trump on whether a long-term deal could be reached. Photograph: Alex Edelman/AFP/Getty Images

Hundreds of thousands of federal employees returned to work on Monday after the longest shutdown in US history, though president Donald Trump warned that he could close the government again if he does not secure funding for a border wall.

A three-week spending agreement was reached on Friday, funding the government until February 15th. The breakthrough ended the 35-day partial shutdown.

Asked about the odds that a longer-term deal could be struck, Mr Trump told the Wall Street Journal in an interview: “I personally think it’s less than 50-50.”

He also reiterated that he could use emergency powers to secure the money need for his wall if an agreement could not be reached with Congress before February 15th.

Speaking to journalists on Monday – the first White House press briefing since December 18th – press secretary Sarah Huckabee Sanders said that there will be “no permanent damage” to the US economy from the shutdown.

“The numbers show that we have an incredibly strong economy,” she said.

Only fools, or people with a political agenda, don’t want a Wall or Steel Barrier to protect our Country from Crime, Drugs and Human Trafficking. It will happen - it always does!

She was speaking as figures from the Congressional Budget Office put the costs to the US economy of the shutdown at $3 billion (€2.6 billion).

The non-partisan federal agency estimates that the US economy lost $11 billion over the five-week period, though it expects $8 billion of this to be recouped as workers receive backpay and the system reopens.

Nonetheless, it says that the US economy will be 0.02 per cent smaller this year due to the shutdown.

A group of congressional members from both parties have been appointed to try and find a longterm bipartisan solution to the funding issue.

They will meet on Wednesday for the first time in a bid to thrash out some kind of compromise on immigration – the most contentious issue in the ongoing funding battle.

Mr Trump is demanding $5.7 billion for his border wall, but Democratic leader Nancy Pelosi has dismissed these calls, describing the concept of a wall as “immoral”.

“Families across the nation are still trying to recover from a month of missing paycheques and overdue bills, but the president is already threatening a second shutdown if he doesn’t get his way,” House Speaker Nancy Pelosi said as members of Congress returned to Washington for the working week.

She also confirmed that the State of the Union address, which had been scheduled to take place on Tuesday evening would not go ahead.

It is not yet clear if or when the president will be invited by Ms Pelosi to deliver the annual presidential address to Congress.

Mr Trump, who was widely seen as having capitulated to Ms Pelosi by agreeing to reopen the government on Friday without money for his much-feted border wall, hit back at criticism of his negotiating tactics on twitter over the weekend, saying the wall “will happen”.

“Only fools, or people with a political agenda, don’t want a Wall or Steel Barrier to protect our Country from Crime, Drugs and Human Trafficking. It will happen – it always does!”

Meanwhile, Mr Trump’s ally Roger Stone is due to appear in court in Washington DC on Tuesday following his arrest by FBI officers on Friday in connection with the Special Counsel investigation into Russian interference in the US election.