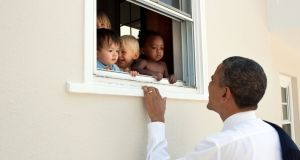 A tweet by former US president Barack Obama has become the most-liked of all time. Photograph: @BarackObama/Twitter

A tweet by former US president Barack Obama condemning racism in the aftermath of a far-right rally in Charlottesville, Virginia, has become the most liked tweet ever, with more than 3 million social media users so far endorsing the sentiment.

The tweet, quoting the late South African president Nelson Mandela, read: “No one is born hating another person because of the color of his skin or his background or his religion.”

Mr Obama followed the tweet with more from Mandela’s autobiographical Long Walk to Freedom: “People must learn to hate, and if they can learn to hate, they can be taught to love.

“For love comes more naturally to the human heart than its opposite.”

Each has had more than a million likes, and hundreds of thousands of retweets.

"No one is born hating another person because of the color of his skin or his background or his religion..." pic.twitter.com/InZ58zkoAm

Far-right protesters opposing the removal of a statue of Confederate General Robert E Lee from Emancipation Park rallied in Charlottesville on Saturday. Many waved burning torches and wore Nazi or other white supremacist regalia. They were met with counter-protests from antifascist campaigners, who were targeted by a man who drove a car into a group, killing civil rights activist Heather Heyer and injuring several more.

James Fields - a 20-year-old man who was was photographed earlier on Saturday standing with the neo-Nazi group Vanguard America - has been charged with a number of offences, including murder and malicious wounding.

In the wake of Ms Heyer’s death, many in the US and across the world criticised a terse response from US president Donald Trump on Twitter, followed by a press conference in which he failed to condemn white supremacist groups.

A day later, Mr Trump did explicitly denounce “the KKK, neo-Nazis, white supremacists, and other hate groups”, but his words were undermined within hours when he staged an extraordinary press conference, in which he blamed violence “on many sides” and insisted that some of those at the Unite the Right rally were “very fine people”.

Many on social media pointed out the difference in tone between US presidents 44 and 45.

Six of the 10 most liked tweets of all time are by Mr Obama, from his personal @BarackObama account and as @POTUS44.

The number of likes for Mr Obama’s tweet has now passed the 2.7 million for singer Ariana Grande’s message in the wake of the bombing of Manchester Arena, where she had been performing.

Twenty-two people were killed in the terrorist attack in May.