Spicer leaves post to give successors ‘a clean slate’ 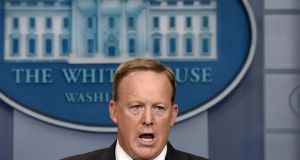 US President Donald Trump’s former press secretary Sean Spicer has said he left his position on Friday because he wanted to give his successors “a clean slate to start from”.

Spicer, the man who has been the public face of the Trump presidency for millions, has resigned after six months in the post as the US president seeks to overhaul his staff in the face of a deepening Russia investigation.

Speaking to Fox News, Mr Spicer said the president did not want him to go and had been “very gracious throughout this process.”

Spicer said that Trump “after some back and forth, understood that the offer that I was making was something that was in the best interest of the administration.”

Spicer, spotted around the White House complex, was described by colleagues as in a good mood and feeling he had made the right decision.

Mr Spicer, an Irish-American, left his post unexpectedly on Friday, after the president appointed financier Anthony Scaramucci as communications director.

It's been an honor & a privilege to serve @POTUS @realDonaldTrump & this amazing country. I will continue my service through August

While Mr Spicer had taken a less visible role in recent months, appearing less frequently in the White House press room, he was understood to have been comfortable with his role as a communications strategist.

He resigned on Friday after learning of Mr Scaramucci’s appointment, reportedly questioning the former hedge fund owner’s qualifications for the role.

Mr Spicer had a strained relationship with Mr Trump, who hired him on the advice of chief of staff Reince Preibus. The president famously left Mr Spicer out of a group of officials who met Pope Francis in May, despite the fact that Mr Spicer is a practicing Catholic.

To many, Mr Spicer had an impossible job, batting off questions from journalists in the White House briefing room as his boss watched from the West Wing.

His career as press secretary got off to a rocky start when he insisted on his first day that Mr Trump had attracted the largest inauguration crowd ever, despite photo evidence showing the contrary.

But unlike most of Mr Trump’s officials, Mr Spicer had professional experience for the job, as former spokesman for the Republican National Committee, where he built up a relationship with Washington-based reporters.

Mr Scaramucci, a hedge-fund owner who is an advocate of Mr Trump’s “America First” economic policy, told a packed press room in the White House on Friday that he hoped to address the “media bias” towards Mr Trump. The new communications director – who professed his “love” for the president several times during the press conference – also said he believed that Mr Trump “has some of the best political instincts in the world and perhaps in history”.

Mr Scaramucci also thanked Mr Spicer for doing an “amazing job” adding: “I love the guy. I hope he goes on to make a tremendous amount of money.”

The surprise departure of Mr Spicer is part of a broader shake-up of White House personnel as Mr Trump prepares for the outcome of the ongoing Russia investigation being led by special counsel Robert Mueller.