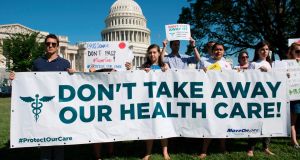 Opponents criticised moves to include a version that would allow insurers to sell plans that don’t comply with the Obamacare requirements. Photograph: Saul Loeb/Getty Images

Republicans in the US Congress were in chaos over healthcare legislation after a second attempt to pass a Bill in the Senate collapsed late on Monday, with president Donald Trump calling for an outright repeal of Obamacare and others seeking a change in direction toward bipartisanship.

Senate majority leader Mitch McConnell announced that he will retreat, and try to pass the more straightforward repeal Bill that Republicans approved while president Barack Obama was still in office and certain to veto it.

“Regretfully, it is now apparent that the effort to repeal and immediately replace the failure of Obamacare will not be successful,” Senate majority leader Mitch McConnell said in a statement.

Senators Mike Lee of Utah and Jerry Moran of Kansas announced on Monday evening they could not support the Bill. They joined Senator Rand Paul of Kentucky and Senator Susan Collins of Maine who previously withdrew support. With the loss of those senators and amid a solid wall of opposition from Democrats - Mr McConnell no longer had enough votes to pass a Republican healthcare bill in the 100-member Senate.

It was the latest in a series of healthcare setbacks for Republicans, despite their control of both chambers of Congress and the White House.

It also came after seven straight years of promising voters that they would repeal Obamacare if they were to control Congress and the White House, only to find that the public liked Obamacare more than their proposed substitutes, according to public opinion polls.

However, Republicans argue that Obamacare is a government over-reach and costs too much money.

Republicans should just REPEAL failing ObamaCare now & work on a new Healthcare Plan that will start from a clean slate. Dems will join in!

While Republicans have insufficient support to bring the Bill forward for discussion in the Senate, it is not clear if the dissenting Republicans could be persuaded to change their positions. Alternatively, Mr McConnell may now consider negotiating with Democrats on on repealing Obamacare.

In a tweet Tuesday night, US president Donald Trump appeared to be in favour of some form of bipartisanship.

“Republicans should just REPEAL failing ObamaCare now & work on a new Healthcare Plan that will start from a clean slate. Dems will join in!”, he said.

Mr Trump had been criticised by some Republicans in recent weeks for not engaging with the healthcare reform proposals, an allegation refuted by press secretary Sean Spicer on Monday. “The president is going to be engaged, he’s going to get this done.”

Mr McConnell had already delayed a vote on the Bill earlier this week after Senator John McCain unexpectedly underwent surgery, prompting his absence from Congress.

Mr Mc Connell, the top-ranking Republican in the Senate, unveiled the latest version of the new healthcare proposal last Thursday. It made significant changes to the previous version of the Bill. Two taxes on high-income earners which had been abolished in the original draft were restored - a 3.8 per cent tax on investment income and a 0.9 per cent charge on income. The new proposal also offered $45 million extra in funding for the opioid crisis and $70 billion to help states reduce premiums.

While both measures were designed to placate those senators worried that the impact of the Republican plan to repeal and replace Obamacare on lower-income Americans, the proposal will still hit poorer Americans hardest according to critics of the Bill.

In particular, opponents criticised moves to include a version of a proposal by Republican senator Ted Cruz that would allow insurers to sell plans that don’t comply with the Obamacare requirements if they also offer plans that do.

In a statement on Monday, Mr Moran said that the senate proposal “fails to repeal the Affordable Care Act or address healthcare’s rising costs. For the same reasons I could not support the previous version of this Bill, I cannot support this one.”

Vermont senator Bernie Sanders welcomed the development. “I’m delighted to see the disastrous Republican healthcare plan won’t succeed - a victory for the millions who stood up and fought back,” he said on twitter.

“The American people want to proceed to health care for all, not see 22 million Americans thrown off the health care they currently have.”

Despite their visceral opposition to president Obama’s Affordable Care Act over the past seven years, the Republican Party has been struggling to forge a united position on how best to replace it. Both the conservative wing of the party and the more liberal members are unhappy with the proposal put forward by Mr McConnell, with conservatives believing it does not go far enough to repeal Obamacare, and liberals fearful of the impact it will have on poor members of their constituencies.