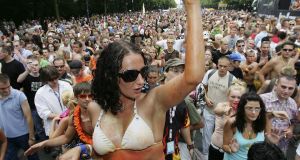 After a decade in limbo the Love Parade is set to make a comeback in Berlin – if organisers can raise financing for the techno party through a “fundraving” campaign.

Love Parade founder Dr Motte, a Berlin techno DJ, has started the campaign with a view to reviving the party next August in the city of its birth. “We want to find out if this is even wanted by the world,” said Dr Motte, real name Matthias Roeingh.

It was in July 1989, in the still divided Berlin, that Dr Motte and 150 others held the first techno street party as a non-profit, political demonstration for peace.

The one-off rave became an annual event, peaking with over a million revellers in Berlin’s Tiergarten park in the summer of 2001. Its swollen size and growing commercialisation left Berlin politicians unsure why the public purse should cover the considerable security and clean-up costs.

After a long battle Dr Motte sold the Love Parade trademark rights to an event company that relocated the party to Germany’s western Ruhr region.

The last Love Parade ended in tragedy in July 2010, when 21 people were crushed to death and 500 seriously injured at the narrow entrance to a party site.

As Dr Motte no longer owns the Love Parade brand, any new party in Berlin will have to find a new name. If, that is, it happens at all.

Organisers have found a novel way to raise money for their plans. Would-be party-goers can donate €5 – in Berlin or online – to buy a dancing figure for a 1:87 scale model of the former party route through Berlin’s Tiergarten Park.

After buying a miniature rave figure – choosing from names such as House Hector, Trance Gender and Dirty Doris – donors can add their dancing figure to the model. Organisers hope to sell 1.5 million figures for the model, earning the €7.5 million needed to stage the event.

“For years the questions have been piling up, ‘when will the Love Parade return to Berlin’?” said Dr Motte. “When, if not now?”

Dr Motte hopes reviving the street party will build awareness for what he and many DJs see as Berlin’s endangered club culture. Though a major tourist draw, rising rents and complaints from residents have forced many leading clubs to close in recent years.

“We see that the authorities, investors, politicians and police still don’t realise the power of techno music,” said Dr Motte, “and the positive contribution it can make for society.”