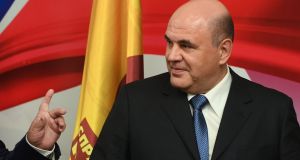 Tax official Mikhail Mishustin has become Russia’s prime minister as a government shake-up marked the start of a bid by president Vladimir Putin to change the nation’s power balance and prepare for his own political future.

Mr Putin signed a decree on Thursday to appoint Mr Mishustin as premier after his candidacy was approved overwhelmingly by the state Duma, the lower house of the Russian parliament that acts as a rubber stamp for Kremlin initiatives.

Mr Putin (67) nominated Mr Mishustin after unveiling plans on Wednesday to overhaul the constitution and redistribute political functions, which could allow Russia’s leader of 20 years to retain control when his fourth presidential term ends in 2024. In a move co-ordinated with the Kremlin, the government of erstwhile premier Dmitry Medvedev resigned after Mr Putin’s announcement.

In a wide-ranging speech to deputies, Mr Mishustin (53) said his government would aim to improve Russians’ living standards, boost sectors ranging from high technology to agriculture, and slash bureaucracy to encourage investment. He would name his cabinet in the coming days, he added.

“I want to assure you that all members of the government will bear personal responsibility for achieving our national development goals,” said Mr Mishustin, who has been the head of Russia’s federal tax service since 2010.

He also pledged to step up work on “national projects” announced by Mr Putin in 2018, which are intended to transform many areas of Russian life from education and healthcare to culture and transport, and even boost the birth rate.

“The government has to do a huge amount of work and significantly strengthen all its fields, and we have everything we need for that: approved plans, resources, targets. And work on national projects must also be intensified,” he said.

Moscow-born Mr Mishustin is an engineering graduate who specialised in computer-aided design. After a spell in banking, he helped modernise Russia’s sprawling tax system as part of a digitalisation drive that has reduced tax evasion and improved transparency.

Analysts see him as a capable bureaucrat who appears to be completely loyal to Mr Putin and has no obvious political ambitions, making him a trustworthy manager of government business while the Kremlin works through the planned constitutional changes.

On his first full day in the limelight, however, Mr Mishustin faced questions from opposition leader and anti-graft campaigner Alexei Navalny over his family’s multimillion-euro wealth and expensive properties.

Mr Navalny, who has been jailed several times for organising anti-government protests, was a thorn in the side of Mr Medvedev and his government, accusing him and other ministers of involvement in major corruption.

Mr Medvedev – who served as president from 2008-2012 before swapping places again with Mr Putin and returning to the premier’s post – was on Thursday installed in the newly created role of deputy chairman of Russia’s security council.

Speculation over Mr Putin’s plans intensified with his announcement of proposed changes to the constitution that would transfer significant powers from the presidency to the parliament and the office of prime minister, while strengthening the state council, which is currently an advisory body to the Kremlin.

Analysts said Mr Putin might view a future role as prime minister, speaker of a more powerful parliament or head of a newly influential state council as ways to remain Russia’s de facto ruler after 2024.

Mr Putin said on Thursday that under the reform plans, Russia’s president would retain major powers, but “the significance of parliament would increase and co-operation between parliament and government would be strengthened”.

“The final word, of course, will be with the citizens of Russia, ” he added, in reference to a planned national vote on the changes that Russian media said will probably take place before May 1st.