Conciliatory PM in indulgent mood, but not on Scottish independence 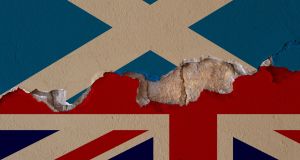 Boris Johnson argues that before the 2014 independence referendum, the SNP said the vote would be a ‘once in a generation’ vote and that they should hold to that commitment.

At prime minister’s questions on Wednesday, Boris Johnson was at his most emollient, praising MPs on all sides for the quality of their questions and even complimenting Jeremy Corbyn on one of his. It was only in response to Ian Blackford, the Scottish National Party’s (SNP) leader at Westminster, that the prime minister bared his teeth.

Johnson denounced the SNP’s record in government in Scotland, accused Blackford of denying democracy by seeking another independence referendum and described first minister Nicola Sturgeon as a protege of her predecessor Alex Salmond, who goes on trial for alleged sexual assault in March.

The previous day, the prime minister had replied to a letter Sturgeon sent a month ago asking him to transfer to the Scottish parliament the power to call a legally binding referendum on Scottish independence. At present, such a referendum must be authorised at Westminster and at Holyrood and Johnson told Sturgeon that he had no intention of changing that.

“We knew that Boris Johnson was going to reject our request,” said Blackford said over lunch in Westminster this week.

They accept that you cannot stand in the face of democracy

“But we don’t believe that this is something that the UK government can afford to do for the longer term. I’ve had a number of conversations with Conservative ministers. They accept that you cannot stand in the face of democracy.”

Johnson argues that before the 2014 independence referendum, the SNP said the vote would be a “once in a generation” vote and that they should hold to that commitment. Blackford’s response is that at the Scottish Parliament elections a few weeks before the EU referendum in 2016, the SNP campaigned on a promise to hold a second independence referendum if there was a change in circumstances.

That change was Britain’s decision to leave the EU, despite the fact that Scotland as well as Northern Ireland voted to remain. A majority in the Scottish Parliament wants a second independence referendum and the SNP won 47 of Scotland’s 59 seats in last month’s general election on a promise to hold one.

“This is not a good look for the prime minister to say to people in Scotland, it doesn’t matter how you vote. It doesn’t matter if you express that will to have an independence referendum. We’re going to ignore you,” said Blackford.

Sturgeon has made clear that the SNP will not follow the Catalonian example by holding an unauthorised independence referendum and Blackford dismisses talk of a campaign of civil disobedience. A bust of Charles Stewart Parnell stands outside the SNP offices at Westminster but Blackford says Commons standing orders would now make the Irish Party’s disruption of parliamentary business impossible.

If Johnson does not agree to a referendum, the SNP will campaign for next year’s Holyrood elections on a manifesto demanding one. After that, Blackford says the task will be to persuade Scots to choose independence.

“My message to the people of Scotland is that we need to be having these conversations door by door, street by street, village by village, town by town. Let’s have that debate about the type of country that we want to be, about the vision and the values that we share, about being a country that’s part of the European mainstream. It is about winning hearts and minds and it’s about confronting some of the legitimate fears that people might have had in 2014,” he said.

The SNP wants an independent Scotland to join the EU but it does not want to adopt the euro. Scotland would set up its own central bank but would continue to use sterling until it introduces its own currency. If Scotland becomes independent, Blackford can envisage new constitutional arrangements connecting it not only with England and Wales but with Ireland.

“You could look again at the Council of the Isles and that becomes much more meaningful,” he said.

“There is a more nuanced relationship between the Irish Government and the United Kingdom and an independent Scotland would seek to have the same kind of relationship.”