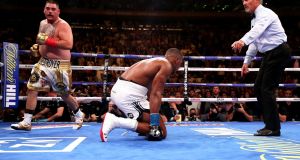 Andy Ruiz jnr pulled off a spectacular upset on Saturday night at Madison Square Garden in New York, defeating Anthony Joshua, the previously unbeaten heavyweight world champion, by technical knockout after the referee stopped the fight in the seventh round.

No one had given Ruiz, a doughy Mexican fighter, a chance against Joshua, a British star who had been fighting in front of crowds of 90,000 fans in Britain. But Ruiz stunned Joshua with furious punching flurries that left him stumbling and, at several points, on the canvas.

The largely pro-Joshua crowd had gone from thrilled to stunned by the time the fight was over. The upset had echoes of Buster Douglas’ shocking upset of Mike Tyson nearly 30 years ago.

Joshua scored the first knockdown with a crisp left hand in the third round. But from then on Ruiz delivered most of the damaging blows. After getting off the canvas in the third round, Ruiz knocked down Joshua twice, starting with left hooks that led to relentless flurries. On the second knockdown of the round, Joshua was saved by the bell.

In the seventh round, Ruiz again brought on a flurry of punches, starting with a left hook that dropped Joshua. About 30 seconds later Joshua went down again. He staggered to his corner and leaned on the ropes. After a brief conversation with Joshua, the referee stopped the fight and Ruiz’s camp stormed the ring in celebration.

“This is what I’ve been working hard for,” he said. “I can’t believe I just made my dreams come true.”

Ruiz’s victory was all the more remarkable because he took the fight on short notice after Joshua’s scheduled opponent, Jarrell Miller, tested positive for performance-enhancing drugs.

Boxing enthusiasts had been talking about the next great era of heavyweights, led by Joshua (22-1), the American champion Deontay Wilder and Britain’s Tyson Fury. Joshua’s loss, unexpected as it was, may not put a damper on those visions, but it may make things more intriguing.

This fight at Madison Square Garden was supposed to be Joshua’s big introduction to the US in an effort to build his stardom beyond his home country. Instead it was a humiliating setback.

Joshua seemed to be looking past Ruiz, and he appeared to have approached the fight more as a brand-building exercise for a dream megafight between him and the undefeated Wilder one day. Instead, because Saturday’s fight had a rematch clause, Joshua is likely to take on Ruiz again immediately.

A few days before the fight, when Joshua sat down with reporters, he threw a major sports cliche out the window right away. He was not simply thinking about Ruiz, he said. Rather he also had his eyes on the more lucrative opportunities against big names like Wilder.

“Even though an athlete or a fighter will always say, ‘I have to focus solely on my opponent on June 1st,’ I’m not going to lie and say I haven’t always looked at that bigger picture,” Joshua said before a single question was asked.

“I’m not looking past him, but I definitely don’t put blinkers on to see the potential, if I beat this guy, what’s out there for me.”

That question took on a whole new meaning for Joshua after Saturday night’s defeat.