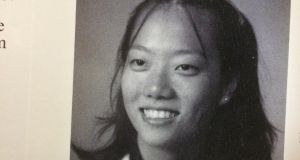 Hae Min Lee: the murder victim in the Serial case. Her family has remained silent. 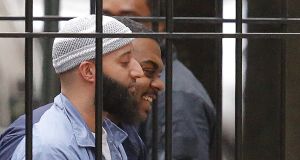 Sitting in the closet of a hotel bedroom in Baltimore, USA, this week, surrounded by bathrobes, Sarah Koenig is reporting daily on what’s been happening at the post-conviction relief hearing of convicted murderer Adnan Syed, the central character in her phenomenally successful 2014 podcast series, Serial.

Within hours, each 15-minute report will be downloaded by hundreds of thousands of people around the world.

Syed, sentenced to life in prison in 2000 for murdering his ex-girlfriend and fellow high school student, Hae Min Lee, is petitioning for a review based on shortcomings in his original defence team.

Koenig is returning to the subject for these hearings 15 months after her original series concluded.

This week’s short clips from the hotel closet (the best spot acoustically, she says) have reignited interest in a story which became a subject of conversation around the world.

It’s claimed that more than 120 million people have downloaded or streamed the first series of Serial.

It led to a resurgence of interest in podcasts – online audio shows downloaded or streamed from the internet – after several years in which people thought they had had their day.

It also revealed the public’s appetite for highly detailed crime documentaries running for 10 hours or more, a trend which has since been confirmed by the success of video on demand series such as Netflix’s Making a Murderer.

The result was season one of Serial: “One story, told week by week.” Koenig delved into every nook and cranny of the murder, the investigation, the trial and the conviction.

She talked to psychologists and forensic scientists. She chased down unexplored leads.

She explored the teenage subcultures of suburban Baltimore, an area populated by first- and second-generation immigrants and upwardly mobile African-American families.

It wasn’t a murder mystery, exactly, although it had elements of crime fiction in its storytelling style.

Nor was it a straightforward miscarriage of justice campaign; Koenig regularly interrogated her own motives and asked whether her tendency to hope Syed was innocent was colouring her approach.

Over successive weeks, Serial built up a complex, multilayered picture of a time, a place and a deeply contested version of what had actually happened.

It was compelling. Clearly there were many troubling things about the case and about Syed’s conviction.

But this new way of storytelling also tapped into a hitherto unknown audience for long-form online audio.

In the process it helped to chip away at one received wisdom about the internet – the idea that digital audiences with irretrievable attention deficits won’t accept longer, more in-depth stories.

In some cases at least, the contrary appears true; new technologies such as podcasting and video on demand make it possible to find audiences who will get hooked into long, complex stories that just weren’t possible in traditional radio or television.

Other factors are contributing to this new genre. Society in general – and the US criminal justice system in particular – now accumulates enormous audiovisual records.

For the first time, these investigations can actually be shown, rather than recounted by talking heads after the fact.

This makes the stories more compelling and dramatic, but can also raise troubling questions about privacy.

And, as has always been the case with crime stories, there are questions about where accurate reporting ends and entertainment begins.

It’s surely no accident that both Serial series one and Making a Murderer – the most successful examples of the genre so far – both revolve around the murders of young women.

(The second series of Serial, about Bowe Bergdahl, an alleged US army deserter who spent five years in Taliban captivity, has not been as enthusiastically received).

It can’t be easy to have your family tragedy turned into popular entertainment. Hae Min Lee’s family stayed silent through the first run of Serial.

“And we look forward to bringing this chapter to an end so we can celebrate the memory of Hae instead of celebrating the man who killed her.”

Not everyone is sensitive to the family’s plight. “Don’t look now, but Serial just became a must-listen again!” trumpeted one headline.

This week’s hearing is Syed’s last chance to get a reversal of his conviction – and also the first time the world has seen him post-Serial.

The courtroom for the current hearing is packed with fans of the podcast. And Koenig is there too. It’s all set for a dramatic denouement.