US Politics: By clinging to the mass delusion that ‘they’re all crooks’, we have made it true 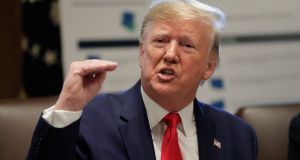 In a country where politicians are mostly respected, Donald Trump’s presidential candidacy would never have been viable. File photograph: Pablo Martinez Monsivais/AP

The best line in Steven Spielberg’s otherwise inert biopic of Abraham Lincoln comes from one of the president’s dodgy middlemen. His job is to induce Democrats to back a constitutional amendment that would abolish slavery in the US. “It’s not illegal to bribe congressmen,” he says, as his reluctant paymaster, fresh from the White House, squirms. “They starve otherwise.”

Spielberg could bank on a joke about 19th-century corruption to still raise a chuckle in 2012. There was enough cynicism around. It was there every time people said that politicians were “all the same” or ranked them below car dealers in the hierarchy of professional trust. It was there when leaders were said to have “lied” about Iraq’s weapons of mass destruction, when credulity and incompetence had been their truer failings.

The politician as crook: there is no doubting the timelessness of the trope. The question is where it got us.

Populism was not just a response to economic dispossession and ethnic grievance. It also fed on a fashionable and unwarranted cynicism about politics. In a country where politicians are mostly respected, Donald Trump’s presidential candidacy would never have been viable. In a country where they are assumed to be venal liars, he is “no worse than the rest of them”, and perhaps better for his lack of moral pretences.

At this juncture, it is customary to tell politicians to therefore clean up their trade, the better to restore public confidence. This is to let the rest of us off much too lightly. At some point, voters themselves must curb a mistrust of public life that is extravagantly out of proportion with its actual dirtiness.

Yes, there is some civic fumigation to be done. The ease with which people flit between government and the lobbying of government is unconscionable. Campaign donations, the oil in the engine of US politics, should be more tightly controlled. Trump did not imagine the “swamp”, even if he then paddled in it with gusto.

Suspicion has become a structural feature of US politics, not a cyclical or event-dependent one

But even if all these stains are taken together, they would not warrant the negativity that for so long passed in polite company as worldliness. In 2015, 18 per cent of Americans said they trusted Washington all or most of the time. Even before the 2008 financial crash, the number was just 24 per cent. This was in a rich, tolerably well-governed country, deep into a boom, where crime was falling and corruption was low.

In 2016, the US was the 18th-cleanest country out of 176, according to Transparency International. You are forced to reach for the Iraq war as the only explanation for this mistrust. But then the figure for the mid-1990s, that belle époque of peace and plenty, was 17 per cent. Suspicion has become a structural feature of US politics, not a cyclical or event-dependent one.

Britain (the 10th-cleanest country in 2016) is another nation that is convinced, against all evidence, that it has been run by self-dealing bandits since forever. Guy Fawkes was the “last man to enter parliament with honest intentions”, says any giggling banter merchant at a dinner party. And in entertaining this delusion for so long, to such corrosive effect, it has ultimately come true.

The more we described as liars people who were not liars, the easier it became for liars to say they were not liars. Authentic villains got lost in the haze of indiscriminate cynicism.

Democracy cannot do without a certain measure of scepticism. But cynicism is another thing, and nihilism yet another

It is telling how few of Trump’s supporters have mounted a defence of his own behaviour of late. Instead, they make tu quoque arguments about the Democrats. It was a favourite of Soviets during the cold war, this whataboutism, which makes it all the more piquant in the mouths of US conservatives. And still, all they are doing is honouring a culture – fomented by liberals as much as the right – in which everyone in high office is held to be chin-deep in muck.

It is there as far back as Chaucer, never mind Shakespeare, this idea of the corrupt churchman or senator. Democracy cannot do without a certain measure of scepticism. But cynicism is another thing, and nihilism yet another. They lead to what the historian Richard Hofstadter called “the paranoid style in American politics”, where conspiracy theories flourish and fringe elements prosper.

In recent years, the answer to populism has been tougher scrutiny of politicians, hence all the fact-checking of their statements and scrutiny of their funding. But the solution also requires something counter-intuitive: a base level of respect for their trade. The idea that we all live in some great Tammany Hall of deceit and graft is not just wrong. It enables it to become true. – Copyright The Financial Times Limited 2019