US president Donald Trump has changed his opinion on the Kurds from once calling them 'allies' to now seeing them as "a worse threat than Isis". 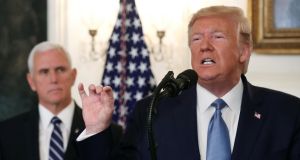 US president Donald Trump announces the lifting of sanctions on Turkey in a White House speech on Wednesday. Photograph: Mark Wilson/Getty Images

US president Donald Trump has lifted sanctions on Turkey, saying the country has committed to a permanent ceasefire in northern Syria and defending the US decision to withdraw from the region.

“Let someone else fight over this long bloodstained sand,” Mr Trump said in the White House, adding that other nations in the region “must ultimately take on the responsibility” for its future.

Mr Trump’s decision to withdraw US troops from northern Syria earlier this month effectively gave Turkey the green light to invade the area. The move was widely seen as a victory for the Assad regime, Iran and particularly Russia, which is now taking a central role in controlling that area of Syria.

In a speech on Wednesday that doubled-down on his pledge to take the US out of conflicts in the Middle East, Mr Trump touted what he suggested was an American military success. “Our troops are safe,” he said, noting that no American blood had been shed in the withdrawal.

“We have done them a great service, we’ve done a great job for all of them, and now we’re getting out,” he said.

“How many Americans must die in the Middle East in the midst of these ancient sectarian and tribal conflicts?”, he asked. “After all the previous blood and treasure America has poured in to the deserts of the Middle East I am committed to pursuing a different course, one that leads to victory for America.”

As a condition of the deal, the Kurdish YPG fighters – who were until recently allied with US soldiers – were ordered to withdraw completely from the area.

Mr Trump described the ceasefire, which Turkey has now said is permanent following its agreement with Russia, as a “major breakthrough towards achieving a better future for Syria and the Middle East”.

As a result, he was instructing the US treasury secretary to remove the sanctions on Turkey that were announced earlier this month, he said.

During his speech Mr Trump criticised the Obama administration’s decision not to confront Syrian president Bashar al-Assad after he used chemical weapons against his own people, noting that he himself had responded to a chemical attack by Mr Assad with a missile strike in 2017.

But he said the United States would enter conflict only in limited circumstances in the future. “When we commit American troops to battle we should do so only when a vital national interest is at stake...The job of our military is not to police the world, other nations must step up and do their fair share.”

Mr Trump also called on European countries to take back for incarceration and trial their citizens who joined the Islamic State terror group, noting that Europe had been “very unresponsive” until recently on this issue.

Mr Trump was speaking as US defence secretary Mark Esper arrived in Baghdad on an unannounced visit. US troops whi have been withdrawing from northern Syria have been moving into Iraq, but the Iraqi government has said that they are not welcome.

In a statement on Wednesday Iraqi prime minister Adil Abdul Mahdi said US troops pulling out of north east Syria and entering Iraq were not permitted to remain. “We have [already] issued an official statement saying that and are taking all international legal measures. We ask the international community and the United Nations to perform their roles in this matter,” he said.