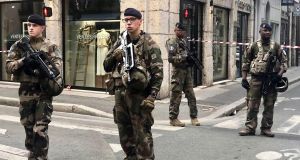 Soldiers of French antiterrorist plan ‘Vigipirate Mission’, secure the access near the site of a suspected bomb attack in central Lyon on May 24th 2019. A small explosion Friday on a busy street in the French city of Lyon lightly injured several people, local officials said. Photogrpah: Sebastien Erome/AP Photo 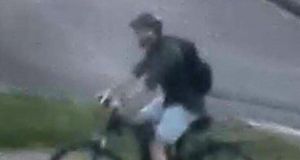 The man suspected to have planted a parcel bomb in the central French city of Lyon that wounded 13 people last week has told investigators that he had pledged allegiance to the Islamic State, a judicial source said on Thursday.

Police arrested the main suspect, 24-year-old Algerian computer student, and three other people in connection with the case on Monday.

“He admitted having made the parcel bomb and deposited it late on Friday afternoon not far from Lyon-Perrache train station in front of a bakery,” the source close to the investigation said.

Most of those hurt were hospitalised for treatment to leg injuries that were described as light.

French president Emmanuel Macron characterised the incident as an “attack” when the news broke during a live YouTube interview ahead of the European elections.

The partially masked suspect appeared in security camera footage wheeling a bicycle to the scene, before leaving a bag outside a branch of Brioche Doree, a popular bakery chain.

Soon after he left, the blast rained metal bolts on passersby in front of the premises on rue Victor Hugo, several blocks from the city’s main station, according to police.– Reuters

1 Coronavirus: ‘Midlands lockdown’ on the cards following surge in cases in Kildare, Laois and Offaly
2 Ireland's 'R number' of almost 2 a 'serious concern' as number of new cases jumps
3 Masks Q&A: Who has to wear them in shops and what happens if you don’t?
4 How a ship abandoned by its owner brought deadly cargo to Beirut
5 Micheál Martin: Be wary of thinking virus can be governed, it ‘will come back to bite us’
Real news has value SUBSCRIBE