Robert Emmet gets Washington park named after him 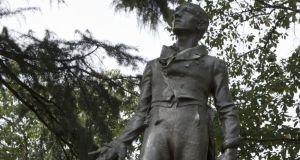 Statue of Robert Emmet on Embassy Row at 24th Street and Massachusetts Avenue, Washington: How Lincoln came to be familiar with Emmet’s speech is not known. Photograph: Carol M Highsmith/Buyenlarge/Getty

On a leafy corner of northwest Washington stands a statue of Irish nationalist hero Robert Emmet.

The bronze statue is one of four scattered around the world, designed by Irish sculptor Jerome Connor. One version stands in St Stephen’s Green, Dublin. A second was dedicated by Éamon de Valera in Golden Gate Park in San Francisco in 1919, while another found its home in Emmetsberg, Iowa, a rural town founded in 1855 by Irish settlers.

The Washington statue, which stands close to the Irish Embassy, was rededicated in 2016 as part of the Easter Rising commemorations. A Bill to rename the triangular piece of land where the statue stands as Robert Emmett Park passed Congress this year thanks to the efforts of the Ancient Order of Hibernian group, former congressman Joe Crowley and others.

The figure of Robert Emmet looms large in Irish-America. A founding member of the United Irishmen, he led a failed coup against the British in 1803 and was sentenced to death. His public hanging at the age of 25 in Thomas Street ensured his martyrdom.

Emmet’s sympathy with the American revolution cemented his links with the emergent nation across the Atlantic. Indeed it is believed that he was planning to escape to America with his fiancé before his capture. His brother, Thomas, emigrated shortly after, eventually becoming New York attorney general. His son, also Robert, became a well-known political figure.

But it was Emmet’s famous Speech from the Dock, delivered on the eve of his execution, that was to secure his legacy. The speech became a publishing sensation in the 19th century, not least in America. Among those familiar with the speech was Abraham Lincoln.

Lincoln’s links with Emmet are explored in Niall O’Dowd’s book Lincoln and the Irish: The Untold Story of How the Irish Helped Abraham Lincoln Save the Union. Speaking in conversation with Irish Ambassador Dan Mulhall at an event last week at the Irish Embassy in Washington, O’Dowd described how Lincoln had learned Emmet’s speech by heart, often delivering excerpts as a party piece.

The association was not a natural one. Lincoln, like many in the Republican party, was ambivalent – to put it mildly – about the Irish Catholics who by the mid-19th century were arriving by their thousands to American shores. The 1850s was the heyday of the “Know Nothing Party”, an anti-Catholic party. Many of its members joined the Republican Party which was founded in 1854.

As the civil war approached, Lincoln knew that he needed the support of Irish Catholics as the Union army sought to quash the pro-slavery Confederates. O’Dowd shows how Lincoln enlisted the help of prominent Irish figures such as Thomas Francis Meagher, a Young Irelander who had fled Australia for the United States, and Archbishop John Hughes of New York, to enlist Irish men to the Union side, even though most were Democrat supporters.

Ultimately 150,000 Irish fought for Lincoln’s cause, many in the famous 69th brigade, while an estimated 25,000 fought for the Confederates. The first two men to lose their lives in the war were Irish-born – Pte Daniel Hough from Tipperary and Pte Ed Galloway from Skibbereen, Co Cork.

The Irish suffered huge losses, prompting suspicions they were being used as cannon-fodder. But they were also among the most decorated: 146 Irish men were awarded the Medal of Honour, the highest of any immigrant group.

Today, Emmet’s statue stands proudly on Massachusetts Avenue. Each September, many come to pay tribute to Emmet on the anniversary of his death, a telling reminder of the power he still holds in Irish-America.

How Lincoln came to be familiar with Emmet’s speech is not known. As O’Dowd’s book documents, many of Lincoln’s domestic staff were Irish as were several White House staff members, including Edward McManus, his elderly Irish doorman, and Charles Forbes, his valet, who was with Lincoln on the night of his assassination. Lincoln is also likely to have met Emmet’s nephew, Robert, when he was keynote speaker at the 1856 Republican National Convention.

Whatever the provenance of the Emmet connection, the words of his famous speech evidently meant something to the man who was to have an outsized role in American history.

Today, some of those words are inscribed on the Washington statue, a reminder to passersby of Emmet’s political ideals: “I wished to procure for my country the guarantee which Washington procured for America . . . When my country takes her place among the nations of the earth, then, and not till then, let my epitaph be written.”