‘The inner Hitler was conserved in the east,’ says author and former athlete Ines Geipel 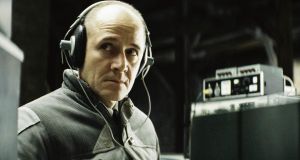 Ulrich Mühe in his role as a Stasi officer in The Lives of Others.

Ulrich Mühe didn’t have long to enjoy his international fame. In February 2007 the actor attended the Oscars in Los Angeles where, thanks to his performance as a haunted Stasi officer, The Lives of Others won best foreign picture. Five months later Mühe, one of East Germany’s most celebrated actors, was dead from cancer.

His last hurrah was overshadowed by a real-life Stasi drama in his family, more complex and troubling than his last film.

Now his photographer son has, metaphorically, disinterred his father to explore the unprocessed trauma left behind. “It was a like a Greek tragedy,” said Andreas Mühe of the last act in his father’s life.

Ulrich Mühe was born in 1953 and married three times. Andreas and a brother came from his first marriage, his half-sister Anna Maria from his second marriage to actress Jenny Gröllmann.

Mühe and Gröllmann were East German cinema’s dream couple but divorced in 1990. Mühe, while promoting The Lives of Others, claimed she had spied on him for the Stasi.

Gröllmann denied knowingly informing for the secret police and secured an injunction against her ex-husband just before she died of cancer in 2006. Months later Mühe was also dead, soon followed by his third wife. Left behind: one surviving ex-wife, a traumatised patchwork family and painful Stasi accusations.

Years later, still struggling with this burden, Andreas Mühe visited the Villa Hügel in Essen, historic home to the Krupp family. On the wall: a stilted family portrait of Germany’s steel dynasty, many members overshadowed by Nazi collaboration. The family portrait, he realised, was one artistic way to present his own family and their Stasi shadows.

“He made himself culpable,” said Mühe of his father to Der Spiegel magazine. “He did that as Jenny was terminally ill and, anyway, one doesn’t pillory anyone from one’s family publicly.”

The photographer gathered various siblings, half-siblings, children, grandchildren, parents and Mühe’s first, and only surviving, wife. Among them: three life-size silicon dolls made of the late Ulrich Mühe and his two late ex-wives.

The result: a troubling family portrait going on display next week, after which the dolls will be destroyed.

As Germany gears up to mark the 30th anniversary of the fall of the Berlin Wall, artists are stepping in to assist historians in their struggle to engage younger generations.

Ines Geipel, a former Olympic athlete and survivor of East Berlin’s doping regime, has written a troubling memoir about her own family trauma: a Nazi grandfather and Stasi father who travelled western Europe under eight different identities. Returning home, her father told nothing of his work and instead, she says, terrorised his children.

Her book, Umkämpfte Zone (Battleground), uses her own family life as an example of the violence and anger that, she says, most eastern families brushed under the carpet.

This could re-emerge in May’s European elections and autumn regional polls in eastern Germany, she warns, with a surge likely for the far-right Alternative für Deutschland (AfD). The standard response of spooked mainstream politicians to far-right populism is pre-election promises to do more to address easterners’ post-1989 humiliations, from lost jobs to shattered families.

Ines Geipel argues that this approach is doomed unless easterners can be encouraged to dig further into their experiences of back-to-back Nazi and East German dictatorships.

“The inner Hitler was conserved in the east, we’ve had zero coming to terms with this period and that is closing in on us now,” she says. “We have to emancipate ourselves from this history of violence, of which the AfD is a part.”

His newest book: a volume of East German jokes the Stasi collected – often with terrible consequences for those who told them.

Among the many bitter jokes about product shortages in the socialist German state: “A man comes into an East Berlin department store, looks around in desperation and asks the saleswoman: ‘Have you no shoes?’ Her reply: ‘No shoes is on the first floor. This floor is no bed linen.’”