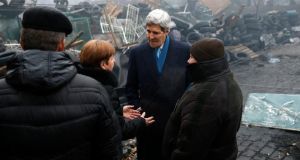 US secretary of state John Kerry stands beside a barricade at the Shrine of the Fallen in Kiev yesterday. Photograph: Reuters/Kevin Lamarque 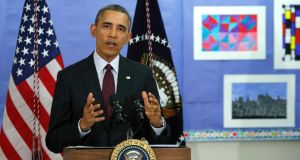 US president Barack Obama answers a question about the situation in Ukraine, following remarks on the budget at Powell Elementary School in Washington yesterday. Photograph: Reuters/Jonathan Ernst

As the crisis in Ukraine escalated over the weekend, a senior United States government official said in a briefing call on Sunday that the White House had made it a practice not to look into the soul of Russian president Vladimir Putin.

This was a nod to George W Bush’s comment after he first met Putin in 2001 when he said he was “able to get a sense of his soul” and that he trusted him.

Such scrutiny is no longer required either by Putin or President Barack Obama. Each has a measure of the other’s foreign policy – Moscow’s imperialist aspirations amid regret over the collapse of the Soviet Union more than two decades ago and Washington’s retrenchment after 13 years of conflict in Iraq and Afghanistan has left the American public weary of war. There is little trust left in the relationship.

Russia’s movement of troops into Russian-speaking Crimea has been described variously as the biggest confrontation between Russia and the West since the cold war, the most dangerous situation in Europe since the Soviet invasion of Czechoslovakia in 1968 and the worst crisis since the fall of the Berlin Wall in 1989.

“This is the most serious US foreign policy crisis since 9/11. It has tremendous long-term implications for how we look at the world,” said Jim Jeffrey, who was Bush’s deputy national security adviser in 2008 when Putin sent troops into Georgia, a sign of the Kremlin’s creeping expansionist intentions.


International consensus
The US has responded this time by seeking international consensus to isolate Russia with economic and political sanctions and to embrace the new fragile pro-western government in Kiev with aid, insulating the vulnerable country from Russia’s withdrawal of fuel subsidies.

“These are nothing – these are pinpricks,” said Jeffrey of the proposed US sanctions.

US officials last night also said Obama would not attend a G8 summit scheduled for Sochi, Russia, in June unless there was a Russian reversal.

Just as John F Kennedy offered “exit ramps” to Soviet leader Khrushchev to de-escalate the 13-day Cuban missile crisis in 1962, Obama has offered Putin an “off ramp” from the crisis by proposing international monitors for Ukraine to protect Russian nationals.


Aid package
Secretary of state John Kerry landed in Kiev yesterday in a display of support for the Ukrainian government, and offered an aid package of $1 billion (€730 million) of energy subsidies. Imposing sanctions on Russia’s banks and freezing its assets will squeeze Putin, but for a man who described the fall of the Soviet Union as a “great geopolitical catastrophe” of the 20th century the economic pain may be a sacrifice worth making.

“The question is how much pain is Putin willing to bear and he may simply say that this is so important that he will pay the cost,” said Herman Pirchner, president at the American Foreign Policy Council, a Washington think tank, and a scholar on Russian affairs.

“Putin’s view will be that in a couple of years all this economic unpleasantness will go away and he will still have Crimea and whatever other part of Ukraine he may be able to occupy.”

To Obama’s opponents, Putin’s soft invasion of Crimea is a symptom of a “weak and indecisive” president who invites aggression, as Republican senator Lindsey Graham of South Carolina put it.

Republican hawks want Obama to go further, suggesting a menu of harder responses such as restoring missile defence systems to eastern Europe, sending US warships into the Black Sea, organising Nato manoeuvres in the Baltic or providing military aid to Ukraine’s fragile government. Right now the US is unwilling to go that far, wanting to avoid sparking a civil war on Europe’s doorstep and Russia’s backyard in what could be a conflict to dwarf the bloody Syrian crisis.

Republican senator John McCain, beaten by Obama in the 2008 presidential election, has decried the president’s “feckless foreign policy where nobody believes in American strength any more”.

Putin’s plans for Crimea are more generally viewed as Russian opportunism to fan secessionist sentiment in a former Soviet state. But foreign policy missteps by Obama have exposed him to the accusation that American weakness has encouraged Russian aggression. Further slip-ups could encourage action by others, including an unsteady nuclear power in North Korea, and China, whose designs in the East China Sea and South China Sea have potentially dangerous implications for the region.

“Without question this is a big test for the administration,” said Tom Wright, a fellow and foreign policy expert at the Brookings Institution think tank in Washington DC.

“If the message goes out that you can be aggressive as long as you are not attacking US treaty allies, that could have dangerous repercussions – it could embolden countries.”


‘A 19th century act ’
The US has sought to cast Russia’s actions as those of an outdated era of empire-building, stressing that the aggressive action in the Crimean peninsula has no place in an interdependent world. “It’s a 19th century act in the 21st century,” said Kerry.

Obama risks framing his foreign policy against a view of the world that differs from reality. The Washington Post declared in an editorial on Sunday that Obama’s foreign policy was “based on fantasy”.

The president has said repeatedly that the cold war is over. In one of the 2012 presidential debates he rubbished Mitt Romney’s warning that Russia posed the greatest threat to US national security, with the withering one-liner: “The 1980s are now calling to ask for their foreign policy back.”

The concern of foreign policy hawks over the deepening Ukrainian crisis is that the 1980s have called and that the White House has no cold war- style response in its foreign policy strategy toolkit.

Under Obama the US is scaling back militarily, recalibrating the country’s core interests away from fighting for freedom far from American shores. In June 2011 he said the “tide of war is receding” and the US must instead focus on “nation- building” at home. Less than a year later he referred to “the end of long-term nation-building with large military footprints”. Plans unveiled last week to scale back the military to pre-second World War levels show this policy in practice.

The US has also sought to rebalance burden-sharing by acting with other countries against human rights abuses or atrocities around the globe. The gulf that developed between the US and its closest ally, Britain, over Syria and the differences emerging with Europe on sanctions against Russia, a much greater trading partner for the European Union than for the US, undermine this strategy.


Unlikely saviour
Obama has scored poorly on foreign policy in his five years in power. His shaky response to the Arab Spring and confused approach to the uprisings in Egypt were compounded by his failure to act on his August 2012 “red line” on chemical use in Syria. Putin became Obama’s unlikely saviour when facing an embarrassing defeat by Congress on a vote to approve an “unbelievably small” strike against the Assad regime in Syria. The US was won over by the Russian leader’s proposal for Syrian disarmament.

Putin then attacked American exceptionalism in a New York Times article last September, saying millions increasingly saw the US “not as a model of democracy but as relying solely on brute force”.

The US president’s warning to Russia last Friday that “there will be costs” over military intervention in Crimea will be inevitably viewed in the context of Obama’s climbdown to Putin on Syria.

“Given Obama’s credibility after Syria and other instances over just a few years many people simply don’t believe any threats he would make,” said Pirchner of the American Foreign Policy Council.

“That is especially dangerous because there will come a point where he will react and make good on his threats. That uncertainty invites miscalculation.”