Pulse of America: Democrats fight back in Nevada ghost towns 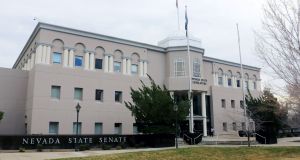 Leaving behind the bright lights of Las Vegas and heading north, the long journey through Nevada begins.

There is little to interrupt the open freeway that runs through this vast desert state.

Old, empty mining towns – once the jewel in the crown of this mineral-rich state – appear now and again. These ghost townswere once the heart of a thriving mining business that drew explorers and industrialists to the heart of the Wild West in the 19th and early 20th centuries.

After a 700km journey on an empty desert freeway, framed by the silhouette of California’s spectacular Yosemite national park to the west, the pretty town of Carson City comes into view.

The fresh tang in the air from nearby Lake Tahoe is a welcome antidote to the dry dust of the desert. The 19th-century city is almost 1,500m above sea level. Its elegant streets and period buildings a throwback to a time when it was a hub for traffic bound west for California, and the staging point for the state’s burgeoning mining industry.

Carson City has been the state capital since Nevada was founded as a state in 1864. Unperturbed by Las Vegas and Reno, its bigger, brasher brothers to the south and north, it has retained its own character and old-world charm.

But Carson City is itself something of a ghost town.

Although the city is home to the state legislature, the Nevada House and Senate meet only ever other year. Even then, legislators meet for just 120 days. There was a time when the biennial system was the norm – in the 1960s the majority of states did not meet every year, but in most states that practice has been phased out. These days Nevada is one of four states in the country whose legislature meets just every other year – Montana, North Dakota and Texas have similar systems.

In part the system arose because of the huge distances involved in governing states – the state of Nevada is the country’s seventh-largest, and its difficult terrain traditionally made it challenging for representatives to travel to the capital in the far west. But it also reflected the notion that representatives are better spending their time connecting with their constituents than huddled away in a capital building working on legislation.

In Texas in particular, the biennial system is proudly worn as a badge of honour, a living example of the Republican idea of small government in action.

But critics believe that the system means lawmakers are forced to rush through legislation in less than four months. Special sessions are common. Representatives are paid $150 a day, plus a per diem, for their efforts – a system that many believe suits only those with the time and means to take four months off and relocate to Carson City.

Today, the elegant dome of the Nevada State Capitol dominates the city. But inside the atmosphere is curiously quiet, as clerks and security staff move around the carpeted halls and offices. On this bright June day, the House and Senate chambers are filled with teenagers from the Boys State organisation, who are spending a week learning about the workings of the state Senate.

But while the state legislature may be out of session most of the time, local politics are alive and well in Nevada.

Nevada is emerging as one of the most important swing states for Democrats in November at a federal level – incumbent senator Dean Heller is facing a tough battle with Democratic Senate hopeful Jackie Rosen, while Democrats are hoping to pick up some seats in the House of Representatives in Congress.

But Democratic strategists are also hoping that the anticipated blue wave will happen at state level. All of Nevada’s 63 seats in the House and Senate are up for election, as well as significant positions such as governor, lieutenant general, and attorney general.

From gun control – a huge issue for this state following last year’s mass shooting in Las Vegas – to healthcare and education, state politics exercise significant control over the everyday lives of Nevadans.

It is this battle for control of the state legislature that is on the minds of attendees at the Nevada Democratic Convention, which is taking place this year in Reno, an hour’s drive north of Carson City.

Often seen as the poor relation to glitzy Las Vegas in the south of the state, Reno reigns proudly as Nevada’s second-largest city. Like many American cities, its downtown area suffered from suburban flight in the 1950s and 1960s. Though signs of urban rejuvenation are under way, the city is best known for its neon lights, wedding chapels and smoke-filled casinos that have seen better days.

Like many of the US’s big cities, its many hotel rooms make it a popular destination for big events and party conferences.

Here in the Grand Sierra hotel – an enormous site encompassing a 7,000sq m casino, cinema and 50-lane bowling alley – the Democratic faithful have gathered for their annual conference.

This is a big year for Nevada, and Nevadans know it. Most of the big names in Nevada’s politics have been rolled out for the convention – Senate hopeful Jacky Rosen and Clark County commissioner Steve Sisolak, a well-known figure in Las Vegas politics who is taking on current attorney general Adam Laxalt for the powerful position of governor.

Despite the fact that Nevada voted for Hillary Clinton, it has not had a Democratic governor for more than 20 years.

Massachusetts senator and possible presidential candidate Elizabeth Warren has also flown in for the event, adding a bit of Washington glitz.

Among the attendees hoping to make their mark in state politics is Jennie Sherwood, a 41-year-old electrician. She is contesting Nevada’s second congressional district in Las Vegas, having beaten a Harvard-educated male rival in the primary contest. She has been involved in union politics for years, and this year decided to run for the state legislature.

“I just felt now is the time. I have these ideas, I want to get them out there, so I realised, I just have to run.”

Although her district generally votes Republican, and people have traditionally been reluctant to challenge the incumbent, she sounds an optimistic note. “People are more energised this year,” she says, citing the response to the election of Donald Trump.

Sherwood is one of dozens of women running in this year’s election in Nevada. The state already has one of the highest rates of female representation in the country – 38 per cent of those in the Nevada legislature are women. There is a hope that the figure could pass 50 per cent in November.

Like Sherwood, Paula Povilaitis is a first-time candidate. She is running in a rural part of northern Nevada, taking on Republican hopeful Alexis Hansen for the seat vacated by her husband, who is running for the state Senate.

The district is traditionally Republican, Povilaitis explains. “There are 17,000 registered Republicans, 9,000 registered Democrats, and 6,000 Independents,” she says. I ask about her chances of taking the seat. “Slim to none,” she replies in a mischievously upbeat tone.

“It’s all about the turnout in midterm elections,” she says. “We’re hoping there will be some never-Trumpers amid the Republican vote.”

But as we stand around discussing politics, more details about her political affiliations emerge. While she has been a lifelong Democrat, she confides that she did not in fact vote for Hillary Clinton in 2016.

She was a Bernie Sanders supporter.

In fact, she is one of many in the convention hall of the Grand Sierra resort who continue to wear their Sanders credentials with pride. At least one attendee is sporting a 2016 “Feel the Burn” T-shirt. Much of the talk on the sidelines of the conference is about the need to find a Sanders-like candidate to take on Trump in 2020, with Elizabeth Warren a popular choice.

Two years after Sanders conceded the Democratic primary race to Clinton, in this room at least the internal divisions of the party’s 2016 presidential campaign are as strong as ever.

The dynamics on show at the Nevada Democratic Convention capture the essential challenge facing the Democrats nationwide as the party tries to capitalise on the deep antipathy towards Trump among many sections of the electorate.

The energy and activism on the left since the election is undeniable. But how to harness that energy into a cohesive political vision and ensure the Democratic Party coalesces around the right political candidate in 2020 will determine the next step in the US’s political future.

Donald Trump’s presidency has ignited feelings on both sides of the political divide. The midterm elections in November will give the first real indication of how millions of voters across the US have reacted to one of the most divisive US presidents in history.