Protesters gather in Baltimore over killing of black man 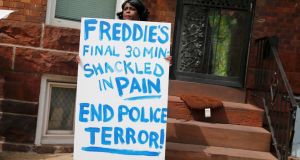 A woman holds a protest sign during a rally to protest at the death of Freddie Gray, who died following an arrest by Baltimore police. Photograph: Shannon Stapleton/Reuters

More than 1,000 demonstrators chanting “shut it down“ marched through Baltimore on Saturday to protest the death of a black man who died after being taken into police custody.

Baltimore’s police commissioner said on Friday that Freddie Gray (25), had been denied timely medical attention for a spinal injury suffered after police apprehended him following a foot chase. Police have not explained how he sustained the injury.

At least 1,500 people had gathered by mid-afternoon at the spot in West Baltimore where Gray had been detained on April 12th by a police patrol and placed inside a transport van.

Mr Gray died on Sunday, a week after his arrest.

Mr Gray’s death is the latest in a series of deaths of black men that have triggered an outcry in the US over the use of excessive force by law enforcement personnel.

Malik Shabazz, an attorney and president of Black Lawyers for Justice, used a megaphone to tell the crowd: “We’ve got to shut this city down. ... We don’t fear no police today.”

Earlier, Mr Shabazz said his group intended to block streets of the city, whose population is largely African-American.

A spokesman for the Baltimore Police declined to comment on tactics and deployment plans for the marches.

“What I can tell you is that we will ensure the constitutional rights of every citizen in Baltimore,” Jeremy Silbert said in an email to Reuters.

A preliminary autopsy report found Mr Gray had suffered a spinal injury. Police have not explained the cause.

Baltimore police commissioner Anthony Batts said on Friday the officers repeatedly failed to give Mr Gray medical assistance and disregarded department regulations by failing to buckle the man into seat restraints while being transported in the van.

Six Baltimore police officers have been suspended in the Gray case, and an internal police investigation is under way.

The department will turn over the findings to state prosecutors and an independent review will follow.

“We are all united in our demand to indict the six police officers and convict,” said Sharon Black, spokeswoman for People’s Power Assembly, organisers of one rally on Saturday.

Last year, the shooting death of unarmed black teenager Michael Brown in Ferguson, Missouri, and the death of Eric Garner, a black father of six, in New York City during an attempted arrest, prompted weeks of protests across the US.

Police have said Mr Gray had fled when officers first approached him in a high-crime area of the city, but he was caught a short time later and placed in the van. He was carrying a switchblade knife, police say.

When the van arrived at the police station, an ambulance was called and Mr Gray was taken to a hospital. He died a week later.

Mr Batts said on Friday that investigators were still trying to determine what happened inside the police van.

Police said their investigation would be completed by May 1st, a day before protesters plan to stage another major rally against police violence in Baltimore.

Civil rights groups have launched their own inquiry into the Gray incident and are going door-to-door to interview possible witnesses, said Ms Black, the People’s Power Assembly organiser.

Mayor Stephanie Rawlings-Blake on Friday praised local organisers of peaceful protests and pleaded with outsiders to follow that lead when they arrive in Baltimore.

But Ms Black said the mayor was trying to divide protest groups, which she said are united in their demands that police brutality end.

Many Baltimore police officers live in suburbs, she said, making them outsiders.

“If the mayor is genuinely worried about outsiders, there are a lot of young white cops from outside Baltimore and they come here with fears. They are an outside occupying force,” Ms Black said.