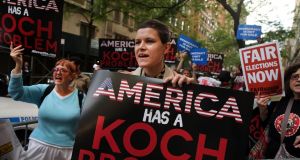 Activists protest near the Manhattan apartment of billionaire and Republican financier David Koch last June in New York City. The demonstrators were protesting against the campaign contributions by the billionaire Koch brothers. Photograph: Spencer Platt/Getty Images

With just 646 days to go, the 2016 US presidential race is already starting up and the ring is packed with various Republicans vying to prove who is the candidate with the best prospects of beating Hillary Clinton, the expected Democratic nominee.

Mitt Romney, who surprised many by exploring (for three weeks) a third tilt at the White House, has decided not to run again. This opens the door for the other prominent candidates, notably former Florida governor Jeb Bush, brother of George W, to tap the big-money establishment Republican donors.

For the short time when Romney was contemplating a third run, he tried to distance himself from his own 2012 self, who viewed 47 per cent of the population as government spongers and was characterised by Barack Obama as an out-of-touch plutocrat.

Romney was not alone in his new-found embrace of lower earners. Senators Rand Paul of Kentucky, Marco Rubio of Florida and Ted Cruz of Texas, all keen to press their presidential credentials, have spoken about the need to tackle income inequality.

“The reason I’m Republican is because I want to help the poor, the middle class,” Romney told students at Mississippi State University this week. “The rich in America, by the way, are fine.”

Obama joked about Romney’s shift at a Democratic gathering in Philadelphia on Thursday, referring to one “former presidential candidate” who was “suddenly deeply concerned about poverty.”

Conservative billionaire industrialists Charles and David Koch announced last week that they and their allies aim to spend $889 million (€786 million) to influence the outcome of the 2016 elections. The announcement came at the annual winter meeting of Freedom Partners, the group at the centre of the Kochs’ political network, at the Rancho Mirage resort near Palm Springs, California.

Even before their financial pledge, the 2016 race was on course to be the most expensive ever with the Republican and Democratic parties expected to spend $1 billion on each of their presidential nominees. The 2012 presidential race cost $2.6 billion, according to the Centre for Responsive Politics, which tracks electoral spending.

The 2016 Koch war-chest is more than twice what their network spent in 2012 and eclipses the combined $723 million spent by the Republican and Democratic national committees in that campaign.

The money will not just be spent on media campaigns but on voter campaigns, academic programmes and think-tank data research designed to have a more lasting influence over the electorate. The financial commitment confirms the Koch network as a third force in American politics, albeit one aligned with Republican interests.

There are, of course, major benefactors on the liberal side, such as former Republican Michael Bloomberg, financier George Soros, and environmentalist/hedge fund manager Tom Steyer. But their operations are not on the same scale of spending or have the same level of coordination as the Koch machine.

The Koch brothers are estimated to be worth $42 billion – each, according to Forbes, making them jointly the fourth richest Americans. Koch Industries, based in Wichita, Kansas, makes an array of products, from toilet paper to corrugated boxes to lycra clothes, and has annual revenues of more than $100 billion. (In Ireland, Koch owns Molex, the cable and electronics component maker.)

Their centre-right aims are simple – the libertarian Kochs want lower taxes, smaller government and fewer regulations, which they say would to allow American people and businesses to live unburdened by Washington.

David Koch, who lives in New York has described himself as a social liberal; he is pro-choice and supports same-sex marriage. But he is a fiscal conservative, drawn to candidates for their desire to balance budgets. The brothers see Obama’s policies that expand social programmes, raise taxes and increase regulations, as a dangerous shift to socialism and a threat to the economy.

The Kochs pumped an estimated $290 million in the run-up to last November’s midterm elections. The investment paid rich dividends as Republicans retook control of the Senate for the first time in eight years, won their biggest majority in the House of Representatives since the 1920s, and put the party’s candidates in 31 state governor houses.

The Koch election spending is considered “dark money,” unlimited and undisclosed through “super PACs” or political action committees and nonprofit groups. This is a consequence of the Supreme Court’s 2009 decision in the Citizens United case, which broke the dam on campaign financing by outside groups.

Combined with the release of their expected 2016 spending, last weekend’s confab showed that the Kochs are willing to step into the light and flex their pulling power – and their financial might.