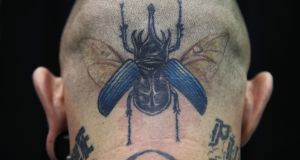 There are deep cultural reasons why tattoos were frowned upon for so long in China because until the Qing dynasty, which ended in 1911, tattoos were used as a form of punishment

When imagining a subversive gangster counterculture that has angered the ruling Communist Party, Peppa Pig is not the first character that springs to mind, but the beloved animated piglet has unwittingly done just that in China.

Youngsters began getting tattoos of Peppa following a series of memes and videos portraying the cartoon swine as a “shehuiren”, a Chinese slang term for a gang member.

The message on China’s buzzing social media was: “Get your Peppa Pig tatt(oo), shout out to your frat!” which clashes drastically with the Communist Party’s anti-tattoo message, which sees body art as out of kilter with its message of wholesome and moral socialist ideology.

In January, Gao Changli, head of the publicity department of the state broadcasting watchdog, issued a list of undesirable elements that included actors with tattoos, as well as hip-hop stars and other proponents of “demotivational culture”.

Even a cursory glance around a downtown Beijing gym the other day showed that a key support for the Communist Party, the rising middle class, certainly does not share the leadership’s view that tattoos are a sign of depravity and decadence. Every person had some form of body art.

Attitudes to tattoos have become emblematic of a growing divide between the party’s inherent conservatism, combined with President Xi Jinpings’ call for a return to traditional socialist values, and the rising individualism and desire for self-expression among the ascendant middle classes.

In March this year the Chinese football association issued an order saying that national team players were not allowed to display their tattoos during international games “in order to introduce a healthy culture and positive energy”. Players covered their tattoos but the fans, well used to the sight of heavily inked footballers, were scornful.

This same attitude towards decadence led to censorship in China of Ireland’s Eurovision entry by Ryan O’Shaughnessy, but another song censored was the Albanian entry Mall as the singer Eugene Bushpepa and his guitarist both sported visible tattoos.

One young Beijing mother, Julia Chou, has seven tattoos, including a dragon, a cat, a fish, and a heart.

“I just really like tattoos, and most of them have a meaning. I probably regret the dragon on my leg a little bit as the fashion has changed, and my views on beauty have changed. I think I’ll get more, even though I have a baby now,” Chou told The Irish Times.

Diaojun, a tattoo artist from Harbin in Heilongjiang province, has been in the business for 20 years, and most of his customers are in the 30 to 45 age group.

“It is very difficult to say about what patterns are most popular. Tattooing is an art. There are different types of art and it’s the same with tattoos. One form of art is on paper and one is on our body,” said Diaojun.

The practice is definitely getting more popular, especially among women and his customers, include civil servants and soldiers.“The government didn’t ban tattoos,” said Diaojun.

There are deep cultural reasons why tattoos were frowned upon for so long in China because until the Qing dynasty, which ended in 1911, tattoos were used as a form of punishment. Thieves would have their crime tattooed on their face before being dispatched into the wilderness.

There are also strong historical links between tattoos and organised crime, similar to the Yakuza in Japan. One tattoo artist said that during the early years of the century, many of his customers were gang members with a strong interest in dragons, tigers or snakes, with the inkwork covering an entire arm or the back.

Tattooing also runs contrary to Confucian notions of filial piety, because willingly puncturing the skin is considered transgressive, and until 2014 soldiers were forbidden from having tattoos.

The rise in interest in tattoos followed on from the country’s growing openness to international cultural mores, such as the popularity of footballer David Beckham and basketball star Kobe Bryant.

“We welcome all people over 18, and different shops attract different customers, but people of all ages seem to like them,” said a Shanghai tattoo artist.

While he did not wish to comment on the government order about people with tattoos, he was very insistent that this was not a ban and the practice was still popular. “The ban on the celebrities with tattoos does not really affect normal people.”

Chinese people enjoy tales of foreigners getting nonsensical Chinese characters engraved on their skin – a particular favourite is “xiaojie”, which means the honorific “Miss” but is common parlance for prostitute.

Despite the crackdown on the gangster version of Peppa Pig, the character remains popular, and has been viewed 45 billion times on China’s main video-on-demand platforms.