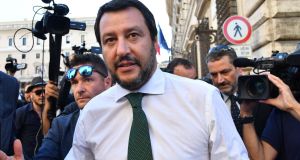 Italy’s interior minister, the far-right firebrand Matteo Salvini, has declared that one of the new populist government’s top priorities will be to “send them home”, signalling that he intends to keep a campaign promise to round up hundreds of thousands of undocumented immigrants in Italy.

The political chaos that has engulfed Italy in recent weeks has centred on questions about whether the government, led by the virtually unknown prime minister Giuseppe Conte, will take a tough line on Italy’s fiscal commitments in Brussels.

But Mr Salvini’s rise to power, from talk-radio host on his party’s show to his appointment to one of Italy’s most powerful government positions, with oversight of domestic security, civil rights, immigration and asylum and elections, could force more dramatic change.

Hours after the government was approved by Italian president Sergio Mattarella, Mr Salvini said Italy was going to take a tougher approach.

“Open doors in Italy for good people and a one-way ticket for those who come to Italy to create commotion and think they will be taken care of. ‘Send them home’ will be one of our top priorities,” he said.

Mr Salvini, who is head of the far-right League, a nationalist party that used to favour secession, campaigned on a pledge to deport about 500,000 migrants, who are illegally living in Italy.

While the rhetoric caused concern among migration experts and humanitarian groups, it was seen as a highly unrealistic agenda, because Italy did not have the resources or legal flexibility to pursue costly mass deportations.

Migration experts contacted by the Guardian are nevertheless alarmed by Mr Salvini’s promotion. The fear that the rights of asylum seekers, migrants and refugees, will be dramatically eroded in a country that is already struggling to accommodate and integrate the new arrivals into Italian communities.

Calogero Santoro is the head of Girasoli, a non-profit that promotes the integration of migrants and refugees in local communities in Sicily. He said: “Fake news about migrants have spread all over Italy during the last campaign. My concern is the future of asylum seekers, people who are eligible for a refugee status. What will happen to them under (Salvini’s) League?”

Mr Santoro added: “This is what scares me. The previous government’s deal with Tripoli is making the lives of this people harder and harder in Libya and now Salvini could make their life impossible in Italy too.”

Mr Santoro was referring to an agreement between Italy and Libya in which Italians helped to train Libyan coast guards, who have stopped migrant boats and taken people fleeing to Europe back to camps in Libya. The agreement has been condemned by human rights advocates. Multiple reports have described inhumane conditions and cases of rape and other physical abuse.

Migration experts are also worried by the possibility that Mr Salvini could reduce funding for reception centres - which have already been criticised by human right groups for poor conditions - and make life even more inhospitable for migrants.

“My fear is that Italy’s reception centres will be transformed in little Calais ‘Jungles’ that will make migrants invisible to the public,” said Fulvio Vassallo, an expert on asylum law from the University of Palermo.

Salvini has also suggested that he would seek to convert reception centres into detention centres and divert funds to be used for mass deportations. Under current rules, every migrant who is deported by plane must be escorted by two Italian agents, at an estimated cost of €3,000 per migrant.

Pierre Vimont, a French career diplomat, who works at the Carnegie Europe thinktank, said Italy’s government could be in violation of international and EU refugee law, if it follows through with its pledge to send hundreds of thousands of migrants back to their country of origin, potentially breaching the Geneva convention.

Mr Vimont, who led European negotiations on an EU-Africa fund aimed at deterring migrants, said it was “a bit ludicrous” for the government to think they had the answers to problems that had eluded other European governments for 20 years.

Sandro Gozi, Italy’s former Europe minister, said the EU had given ammunition to anti-immigration populist parties by not helping Italy deal with large numbers of arrivals. “Europe could and should have done more,” Mr Gozi told the Guardianin a recent interview. “The fact that the Italians feel they have been left alone has fuelled the populists’ agenda.”

The EU has spent more than two years trying to overhaul its asylum law, known as the Dublin regulation. Deep divisions remain over proposals for relocation of refugees from one EU state to another.

Central and eastern European states, led by Poland and Hungary, say they could never accept mandatory quotas, while southern states, such as Greece and Italy, argue that they are being left to bear the brunt.

The issue is heading for a crunch point in June, after a deadline was imposed by European council president Donald Tusk to reach an agreement or abandon mandatory quotas altogether.

“Delays in the implementation of the relocation mechanism have been politically devastating,” Gozi said. “Not because relocation would have solved in itself the migration crisis, but because it showed the Visegrad Group did not want to pay any price.”

Bulgaria, which is handling negotiations, is trying to move countries towards a compromise but Mediterranean states are unhappy about a perceived climbdown on compulsory quotas. “We are going backwards on solidarity and responsibility,” said an EU diplomat. –Guardian